The renewed Egyptian permanent exhibition of the Museum of Fine Arts awaits visitors with numerous new artefacts and themes, now with a larger exhibition space. In the new concept the ancient Egyptian world is presented in three thematic units: Temples – Gods; The Nile Valley – People; Tombs – The Dead. The new exhibition provides the most important information about the period in a spectacular, interactive, clearly understandable, and scientifically pertinent way. A new addition is the “Egyptian chamber of secrets”, where curious visitors can make numerous discoveries and can learn exciting new facts.

Since the opening of its first Egyptian permanent exhibition in 1939, the Museum of Fine Arts rearranged its material on three occasions: in 1972, 1996, and in 2013. The newest permanent exhibition of the Collection of Egyptian Art presents the most important pieces of the material – over five hundred artefacts – not in a chronological order but in thematic units.

In addition to presenting the three fundamental spheres of the Egyptian worldview – those of people, the gods, and the dead – special attention was devoted to showing the varied ways of communication between the three spheres. The colours of the walls in the exhibition spaces are in harmony with the presented themes and ancient Egyptian colour symbolism. The blue of the world of the gods and of man alludes to the colour of the sky and the river Nile. The walls of the halls leading from the world of man to the kingdom of the dead are painted the colour of sand since according to Egyptian belief the place of transition between the two spheres was the desert that began on the fringes of the Nile Valley. The kingdom of the dead was given a so-called old gold tone in reference to another ancient Egyptian belief according to which, when reborn in the netherworld, the dead became shining, golden-coloured divine beings.

Passing through the main entrance, visitors enter the world of Egyptian temples. They can learn about ancient Egyptian creation beliefs, the tools used in temple rituals, and the statues of illustrious people in temple courtyards. Using an interactive tool, visitors can sound an Egyptian rattle instrument called sistrum. The mysterious, sealed-off world of shrines is conjured up in the far end of this hall.

The second part of the exhibition is devoted to the everyday life in the Nile Valley from the fourth millennium BC up to the early medieval Coptic Christianity. Visitors can familiarise themselves with the different Egyptian writing systems and magical practises; the world of Egyptian hieroglyphs and protective amulets can be explored with the help of interactive tools.

Displayed besides mummies in the third and fourth halls are grave goods from Egyptian tombs, which according to Egyptian belief helped the deceased to overcome the difficulties of travelling through the underworld and live as reborn, divine beings in the afterlife.

The new Egyptian permanent exhibition now has a discovery room, where children and adults alike can find out many more interesting facts about Egyptian sculpture, the ancient Mesopotamian cuneiform writing system, and the history of the museum’s Egyptian Collection. 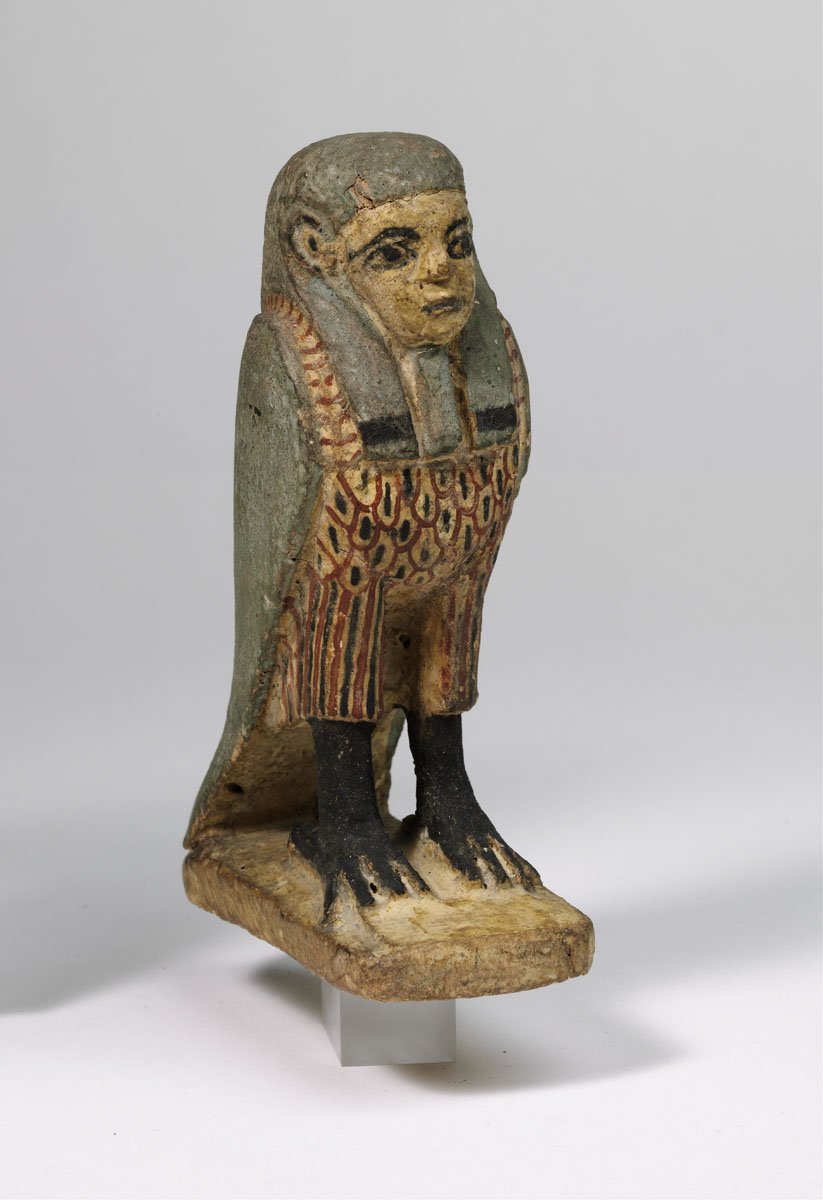 The Mummy of a Falcon 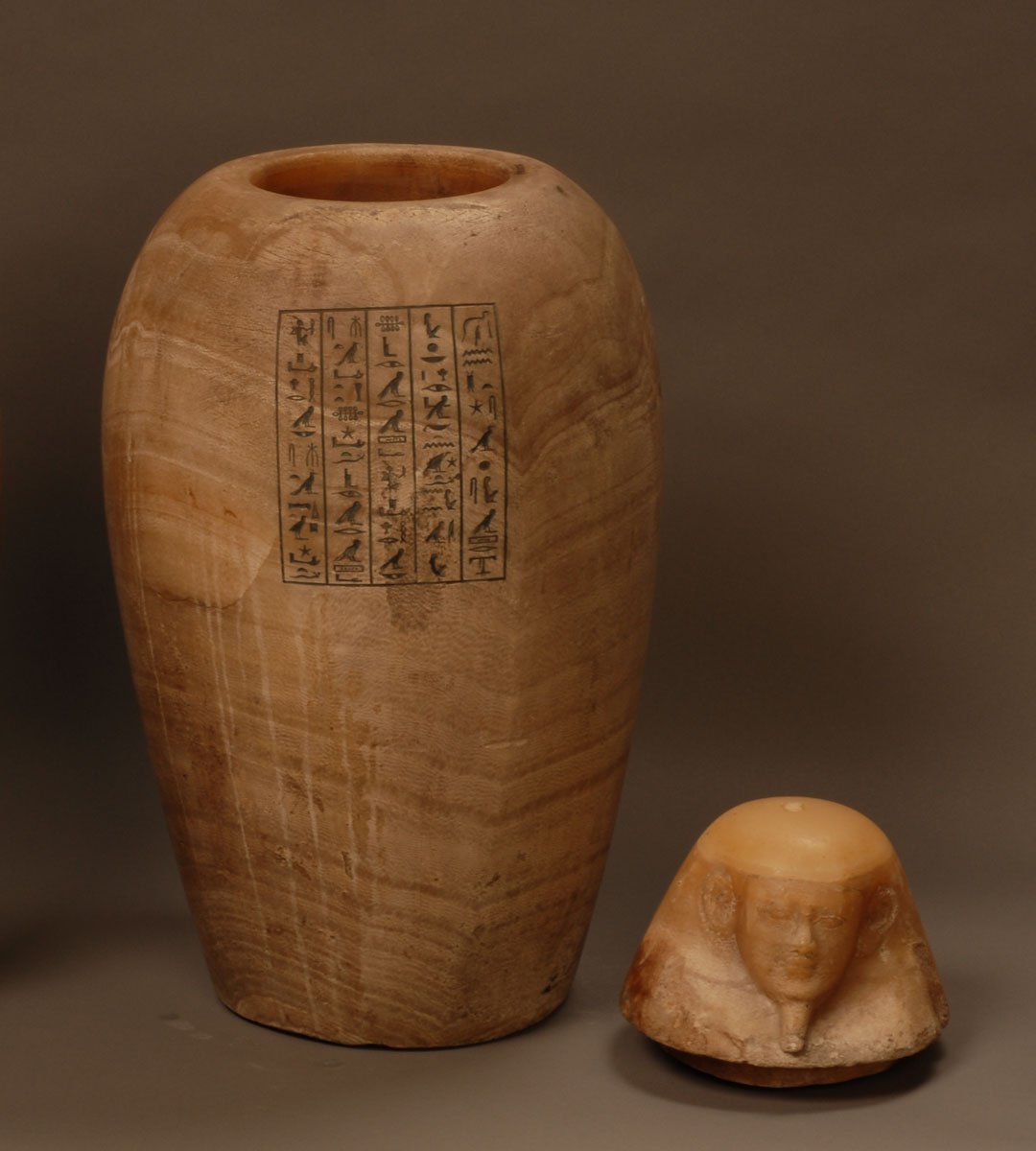 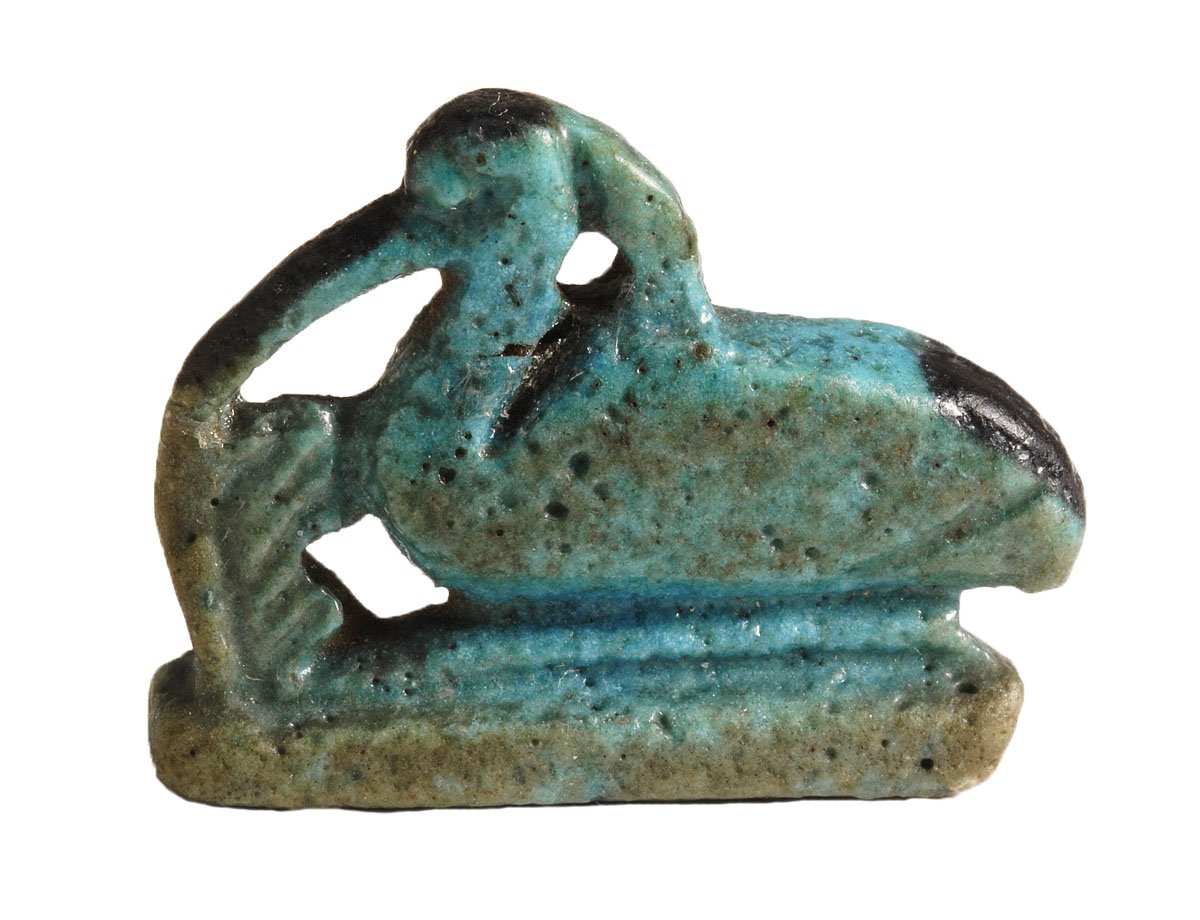 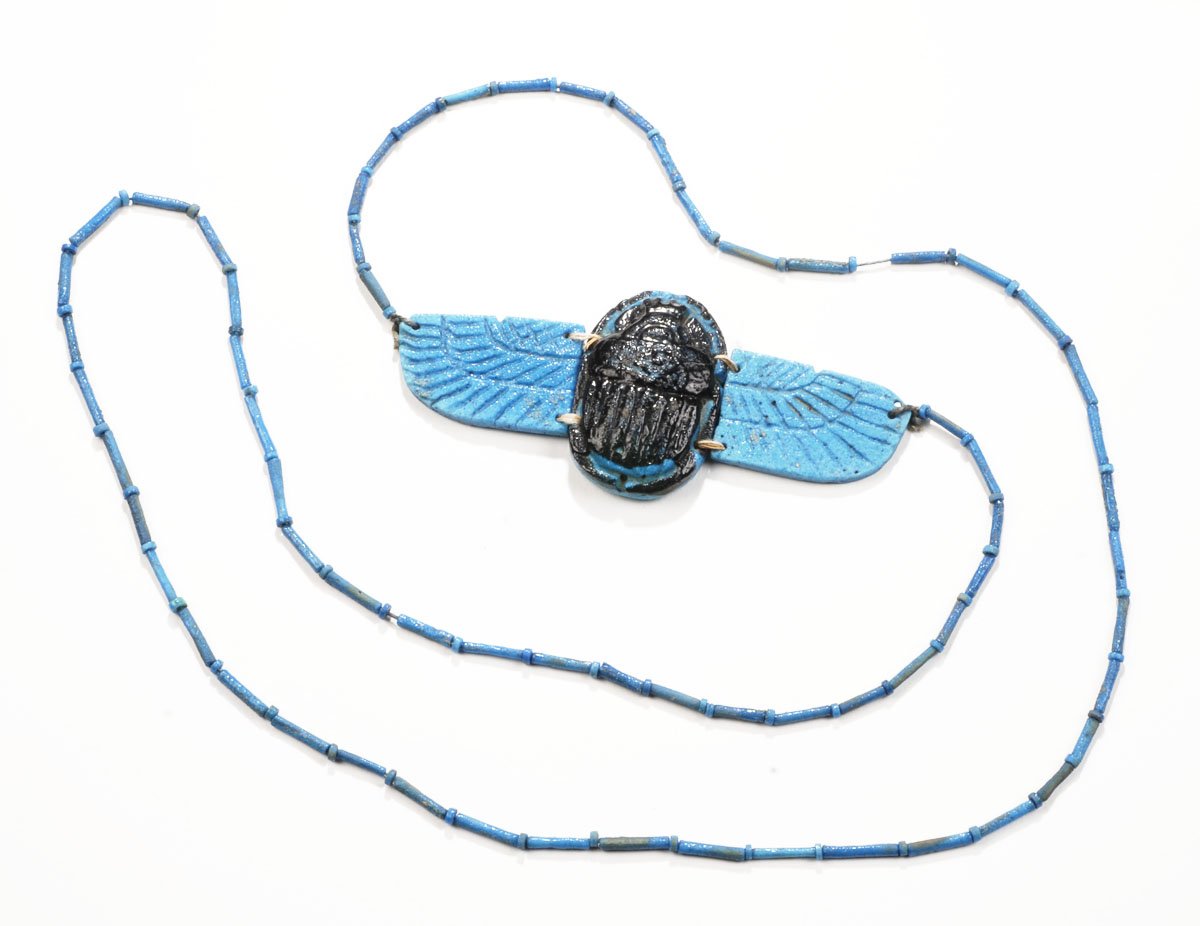 Winged Scarab on a Necklace 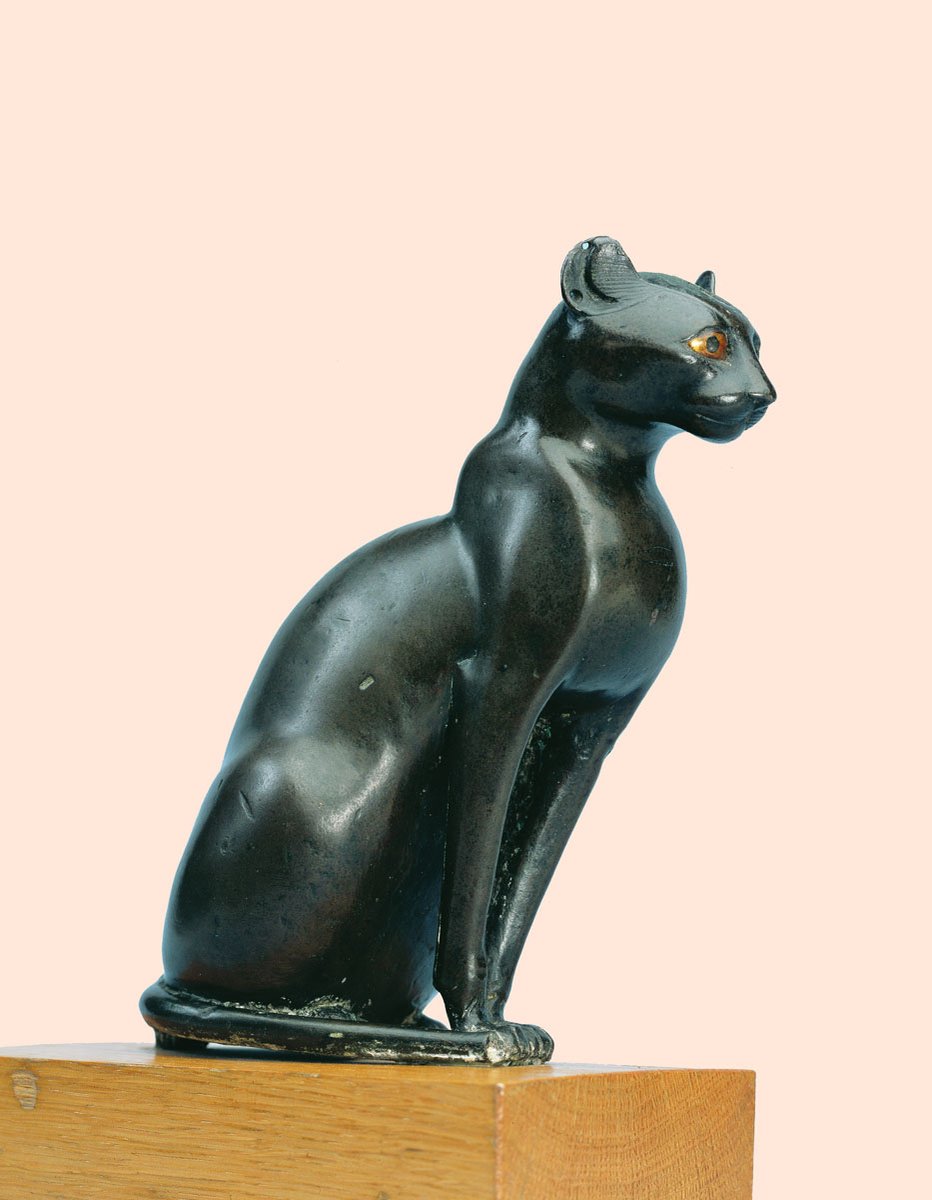 Statuette of a Cat

Journey to the Netherword - Rebirth in Ancient Egypt

“Doing good is a monument.”

Imhotep was the chief architect of Pharaoh Djoser and had the step pyramid and necropolis at Saqqara built in the middle of the 3rd millennium. In the periods to come, he was first widely revered as a wise man, scholar and magician, as well as the patron of scribes. He was later regarded as a demi-god as the son of the Memphite god Ptah. Based on the inscription on its base, this bronze votive statuette was commissioned by Kham-Khonsu and was probably erected in the temple of Ptah in Memphis.

The Egyptians covered the heads of mummies with masks, the outer surface of which was painted. The mask afforded magical protection to the head in the afterlife. The facial features on the mask did not depict those of the deceased individual but rather his or her idealised portrait after turning into a god in the next world. Based on close analogies, it can be assumed that this mask was made in the Faiyum Oasis.

The owner of this embossed stela was the king’s official, Noferhaut. His figure appears in the lower register of the stela: his arms are raised in prayer, while poultry, pairs of gazelle and fish can be seen suspended from a rod on his shoulders. Depicted in the upper register of the commemorative stone slab is the god Amon-Re sitting before a table of offerings. Standing opposite him is Pharaoh Thutmose III, presenting an offering of a bouquet of lotus flowers and papyrus to the deity.

Restored mummy in a toga

How I Became a Mummy