The exhibition of the Museum of Fine Arts, Budapest, opening on 9 April showcases the art of the Netherlandish master, Hieronymus Bosch (ca. 1450 – 1516), who produced one of the most influential and emblematic artistic achievements in European painting. The Budapest show, with close to ninety works on view, is not only anticipated to become the most comprehensive exhibition of Bosch’s works in Central Europe ever, but also one of the most significant Bosch exhibitions of the international museum world in the last fifty years. Bringing to life Bosch’s unique world and conjuring up the spiritual and visual culture of the late Middle Ages, the museum will display almost half of the master’s painted oeuvre,  including ten autograph paintings – among them the Last Judgement triptych (Bruges, Groeningemuseum), the Ship of Fools (Paris, Musée du Louvre), the Adoration of the Magi (New York, The Metropolitan Museum of Art), Saint John the Evangelist on Patmos (Berlin, Gemäldegalerie) and the Ecce Homo (Frankfurt, Städel Museum).

Further loans for the large-scale Budapest exhibition from some fifty public and private collections are among others, from The Morgan Library & Museum in New York, the Museum Boijmans Van Beuningen in Rotterdam, the Rijksmuseum in Amsterdam, The National Gallery in London, the J. Paul Getty Museum in Los Angeles and the Museo Nacional del Prado in Madrid.

The exhibition explores eternal human themes rendered by Bosch in an utterly original pictorial language: the choice between virtue and vice, the questions of faith and truth, experiencing unfettered desires and mastering them, as well as  the spiritual quality of human existence. In addition to autograph paintings and drawings, visitors can see works that represent the antecedents for the master’s oeuvre, as well as the most characteristic masterpieces from his studio and by his followers.

Bosch’s exceptional creativity and the influence he exerted on Netherlandish painting have always been undisputed, while the origins of his extraordinary art continue to fascinate us. Admirers of his works are facing the question: from where and from what does this unique world derive?

Because we are contemplating his works from a distance of over five hundred years, certain details of Bosch’s paintings remain indecipherable. A closer understanding of his universe may be gained by a deeper knowledge of works and written sources that exerted a significant influence on the ideas and forms that define his images. The exhibition, therefore, presents the outstanding works of Bosch within the context of his artistic sources – literary and theological works, Franko-Flemish and Utrecht miniature painting, graphic art, and applied arts objects.

The exhibition showcases the works of Bosch and the art of the period in seven sections.

The introductory section, Times of Transition, evokes the period – the late Middle Ages and the threshold of the early Modern Era – in which Bosch produced his works. In this age, the medieval worldview of demons and angels still existed, while the means of life-like rendering of the visions of the otherworld were already available. This section portrays the master in the environs of ‘s-Hertogenbosch, his native town, where he spent most of his life.

The second unit, called Ship of Fools, evokes how Bosch viewed his own society, and how he observed and captured human weaknesses and sins. Bosch’s influential works revealing his particular interest in honestly depicting human nature are represented by his Ship of Fools (Paris, Musée du Louvre), as well as by Extracting the Stone of Madness (Madrid, Museo Nacional del Prado), and the earliest version of The Conjurer associated with Bosch’s studio (Saint Germain-en-Laye, Musée Municipal Ducastel-Vera).

The third chapter, The End of Times, explores the most captivating theme of Bosch’s art: his spine-chilling visions of the otherworld and of the Last Judgement, through cardinal works as the Visions of the Hereafter (Ascent of the Blessed and River to Hell) from the Accademia in Venice, as well as the Last Judgement triptych from Bruges, Groeningemuseum. In addition to panel paintings, autograph drawings, including the recently discovered Infernal Landscape (private collection) and the Hell Ship Creature preserved in the Akademie der bildenden Künste in Vienna, allow us to discover the free associative processes of Bosch’s ever creative mind. Illuminated manuscripts such as the Book of Hours of Catherine of Clèves (New York, The Morgan Library & Museum) and The Visions of Knight Tondal  (The J. Paul Getty Museum, Los Angeles) represent Bosch’s artistic sources in his depictions of otherworldy scenes.

The fourth section, The Lives of the Saints, encapsulates the guidance offered by the spirituality of the late Middle Ages. For the Christian faithful walking on the rugged path of human existence, the lives of the saints served as an example of how to struggle with demons, i.e., how faith could remain firm in times of darkness and tribulations. There is no doubt that Bosch was well-versed in the legends and traditional representations of the saints; however, his compositions are supplemented with unusual and ominous details. His inventions may be observed in masterpieces such as Saint John the Baptist in the Wilderness (Madrid, Museo Lázaro Galdiano), Saint John the Evangelist on Patmos (Berlin, Gemäldegalerie), and Saint Christopher Carrying the Christ Child (Rotterdam, Museum Boijmans Van Beuningen). Bosch executed several compositions of the life of Saint Anthony the Hermit, the most popular medieval saint. The most significant of these is the Saint Anthony triptych in Lisbon, Museu Nacional de Arte Antiga. The best quality copy of this piece (Antwerp, Museum voor Schone Kusnten), cleaned and conservated in Budapest on the occasion of this exhibition, will be presented together with one of its literary sources, the late medieval “manual” on the persecution of witches, the Malleus Maleficarum (Hammer of Witches) from the National Széchényi Library, Budapest.

The next unit, Imitation of Christ, is arranged around two main themes, the mystery of Christ’s earthly incarnation and the Passion. Two stylistically related early works by the master, The Adoration of the Magi (New York, The Metropolitan Museum of Art) and Ecce Homo (Frankfurt, Städel Museum) are exhibited here side by side. This section also displays the Book of Hours of Engelbert II of Nassau (Oxford, The Bodleian Libraries), providing a splendid opportunity to observe the influence of miniature painting on Bosch’s art.

Bosch’s most disquieting and at the same time most famous work, the Garden of Earthly Delights triptych (Madrid, Museo Nacional del Prado) – and especially its central panel – has prompted many scholars over the centuries to engage in deep investigations. The extraordinary fame and influence of this moralizing triptych is demonstrated by the fact that in the sixteenth century several copies were made after it; among them tapestries interwoven with gold and silver threads. This masterpiece is evoked in the eponymous section of the exhibition by the magnificent taopestry of impressive size and beauty, preserved in the Escorial in Madrid, as well as by the earliest and finest quality panel painting after it from a private collection. The Garden of Earthly Delights is interpreted in the context of late medieval visual culture, such as works representing medieval courtly art, contemporary painted manuscripts, graphic art and various applied arts objects.

The concluding section documents Bosch’s Artistic Legacy. His works inspired not only his contemporaries and the new generations of artists but also set the direction for the further development of Netherlandish painting in the following century. Bosch’s panels – mostly those depicting devils and demons – were copied by later generations of artists and made available to collectors on a wide scale. Paintings by Bosch’s successful followers, including Jan Mandijn and Jan Wellens de Cock, are supplemented by prints, primarily engravings executed in Bosch’s style by Alart Du Hameel and after Pieter Bruegel the Elder.

The exhibition at the Museum of Fine Arts, Budapest, presenting Bosch’s paintings and drawings within the context of their artistic sources and antecedents, seeks to evoke the spiritual realm in which Bosch’s unique art exerting an influence lasting for centuries was conceived.

The exhibition is curated by Bernadett Tóth with associate curators Georgina Csető and Anna Köves, art historians of the Museum of Fine Arts, Budapest.

The show is accompanied by a richly illustrated catalogue in English and Hungarian (separate volumes).

Visions of the Hereafter: The Ascent of the Blessed Hieronymus Bosch 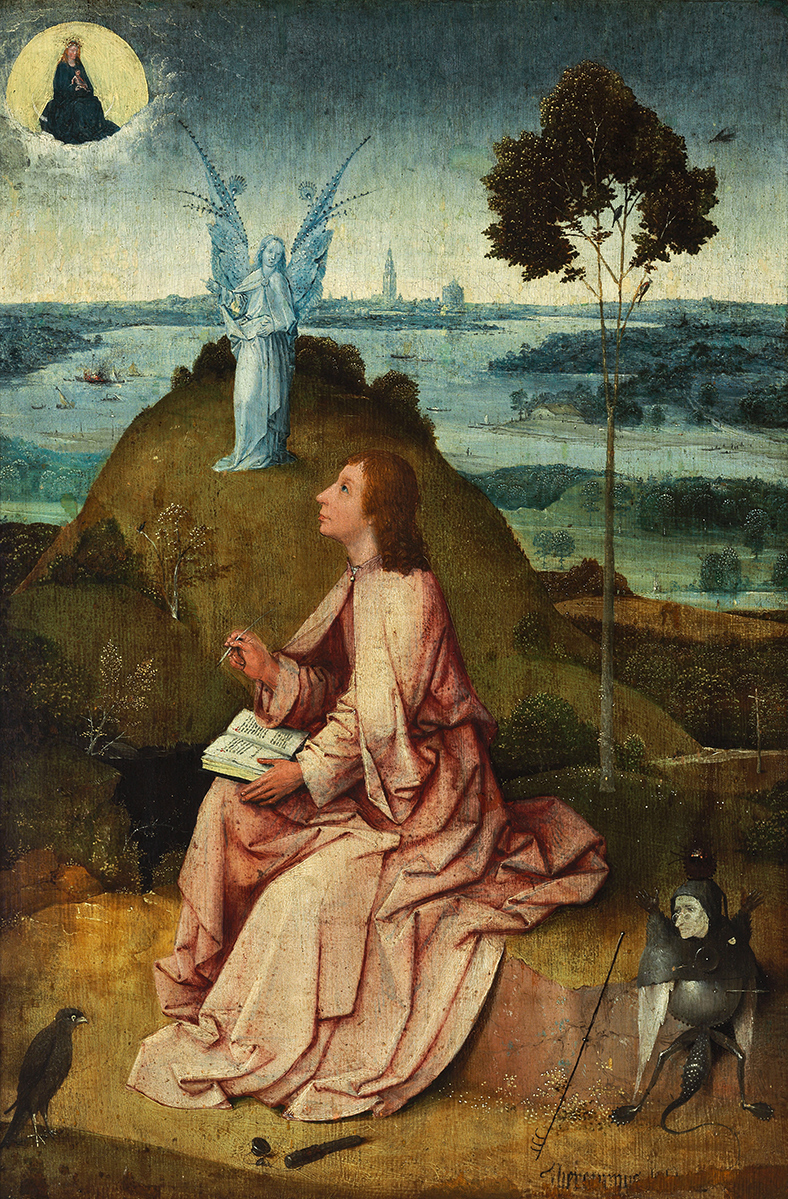 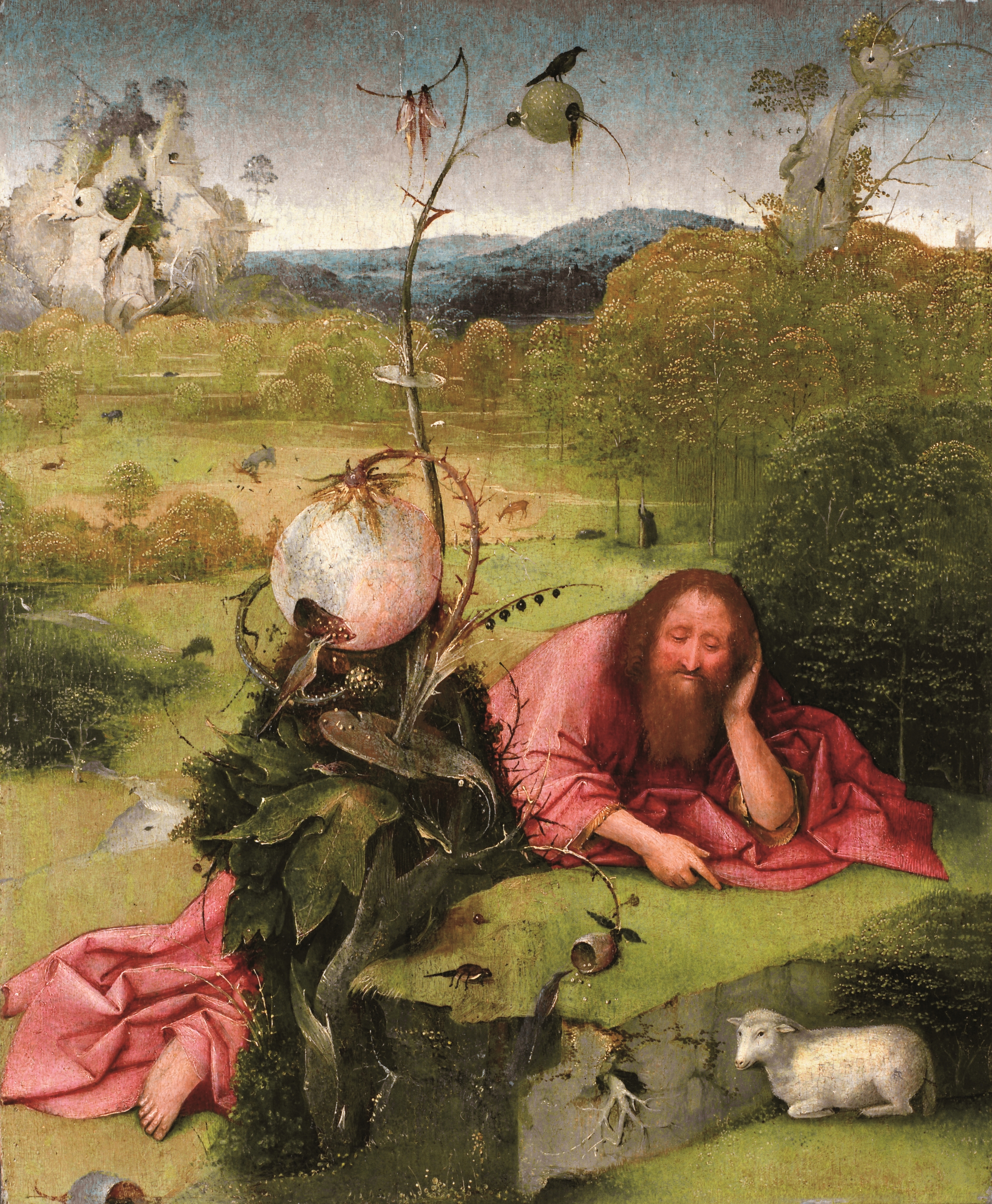 Saint John the Baptist in the Wilderness Hieronymus Bosch 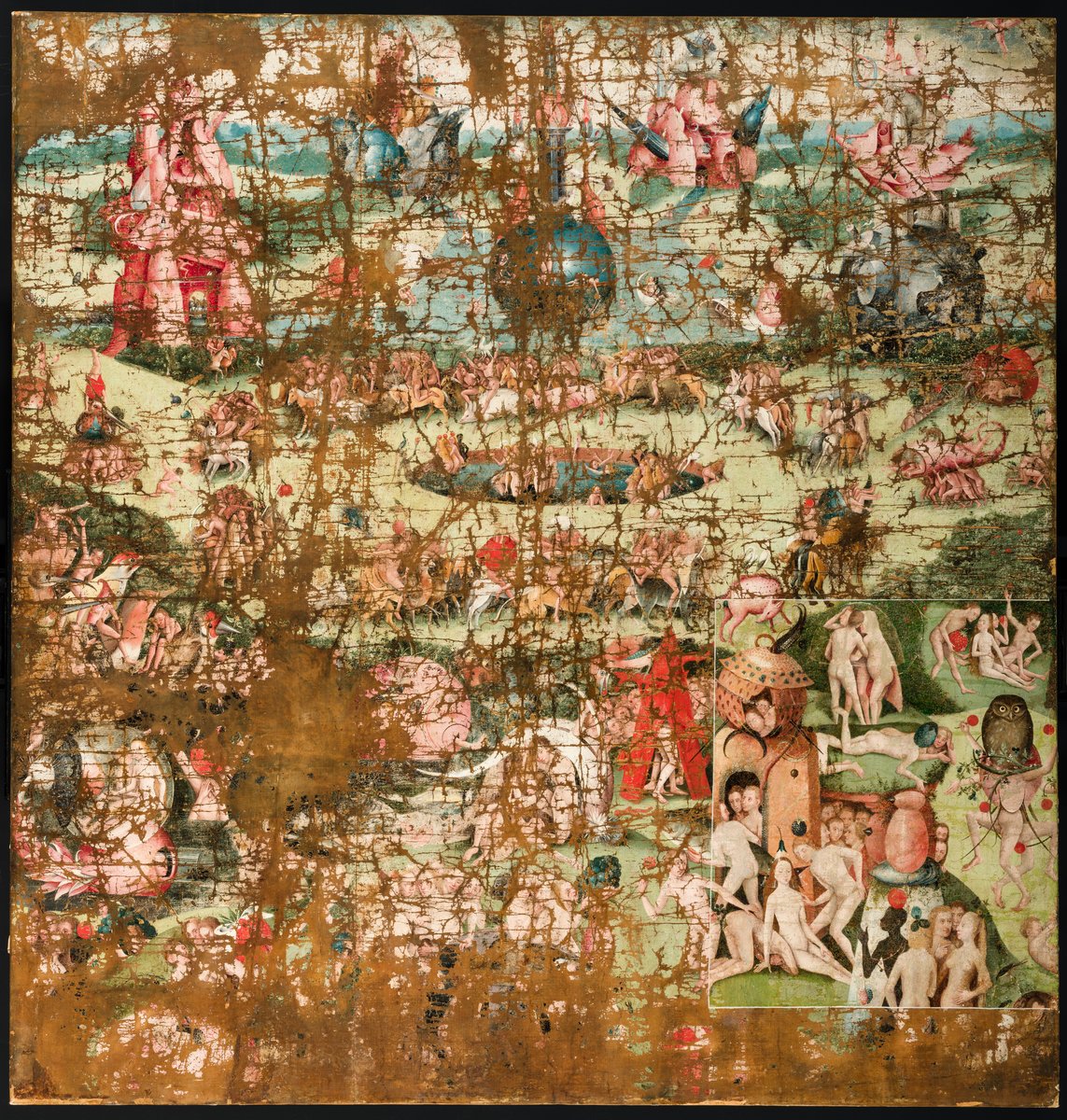 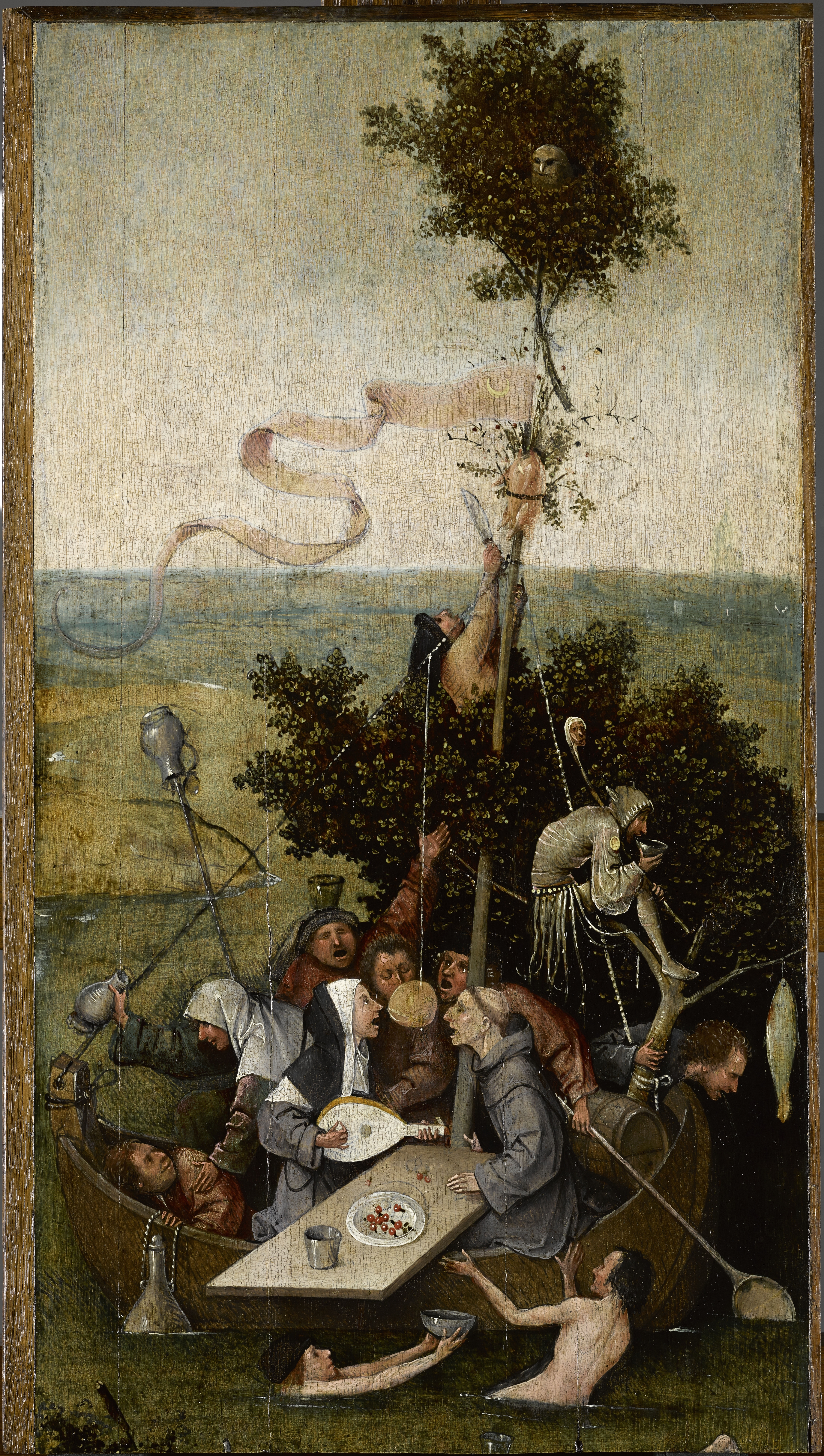 The Ship of Fools Hieronymus Bosch

The Concert in the Egg Follower Hieronymus Bosch 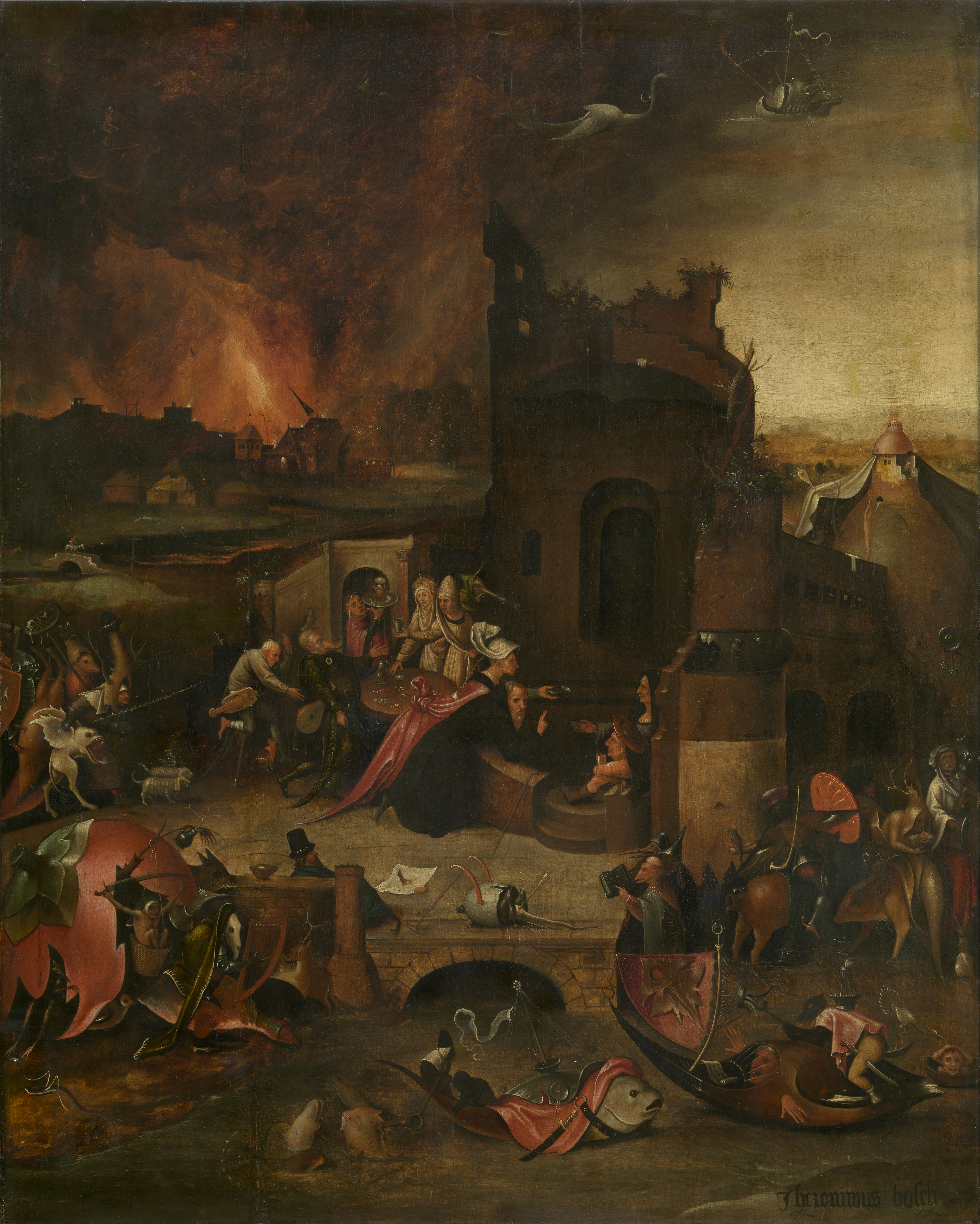 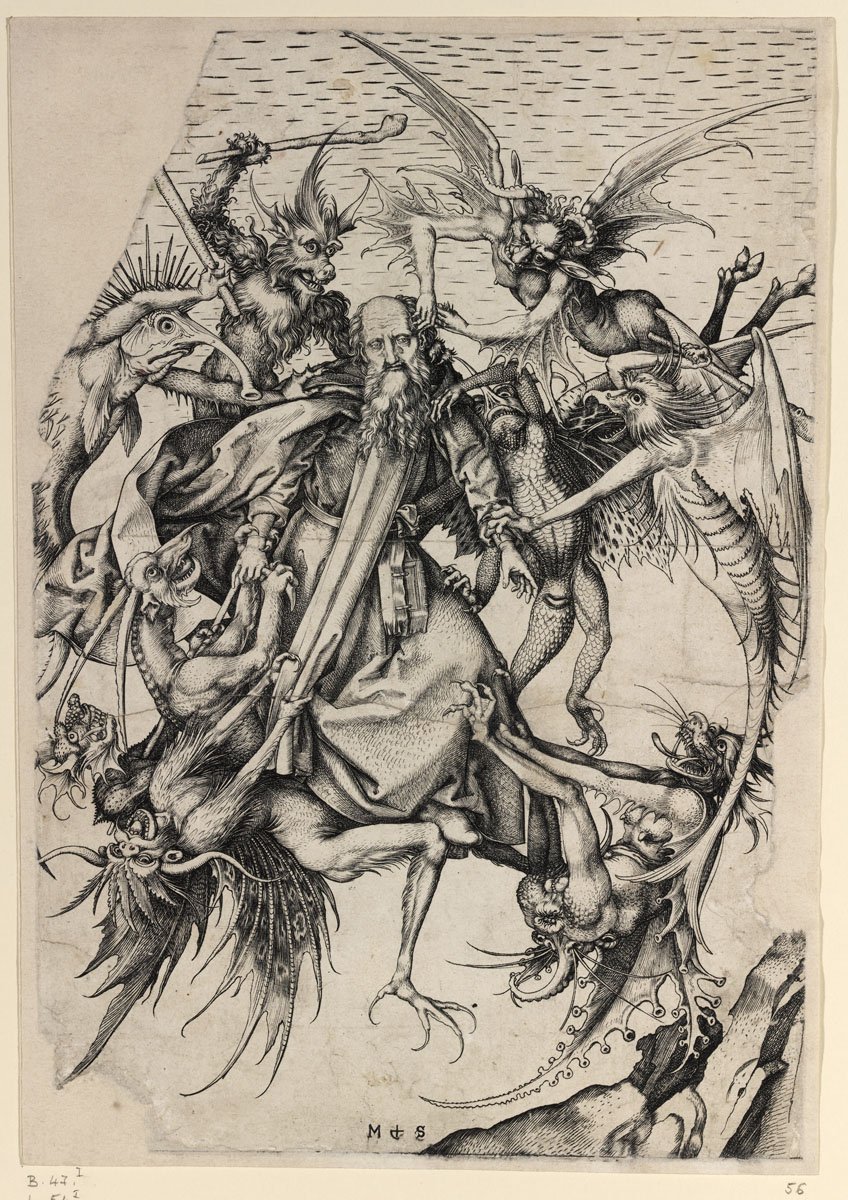 The Tribulations of Saint Anthony the Hermit Martin Schongauer

Visions of the Hereafter: The River to Hell Hieronymus Bosch 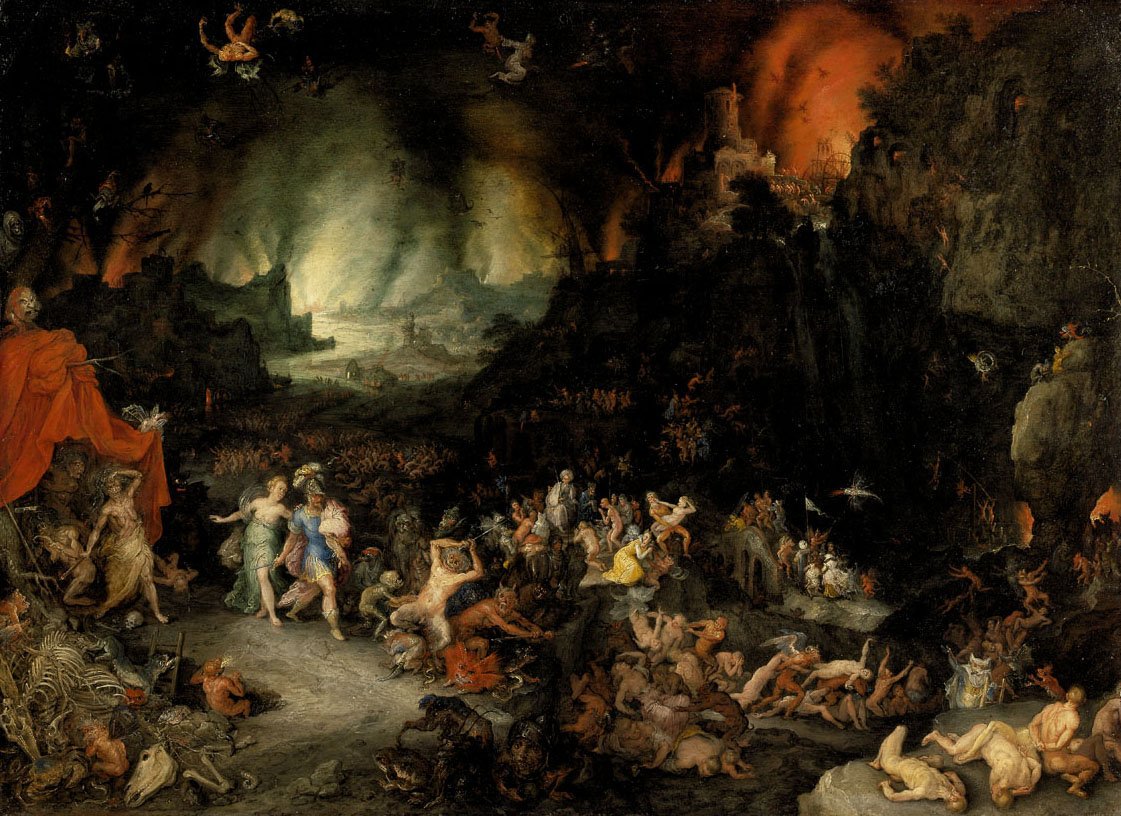 Aeneas and the Sibyl in the Underworld Jan Brueghel the Elder

Hieronymus Bosch launches visionary manifestos, in a strange language, where reality is enveloped in symbols. It is a dramatic introspection, as well as an acute observation of the outside world.

Bosch and Bruegel – From Enemy Painting to Everyday Life