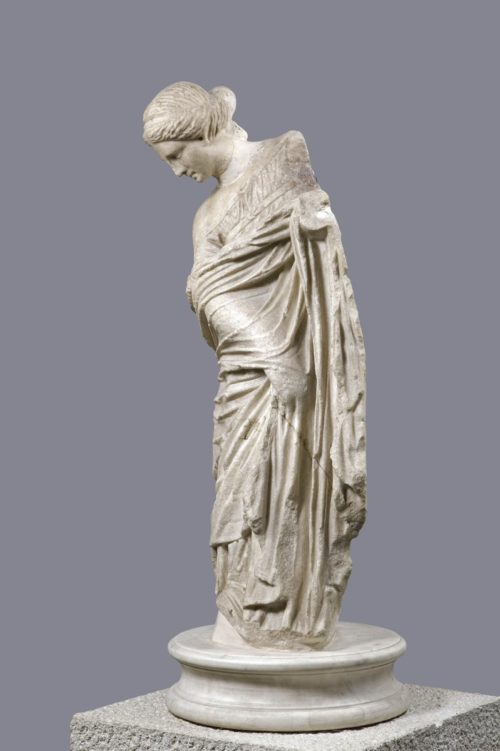 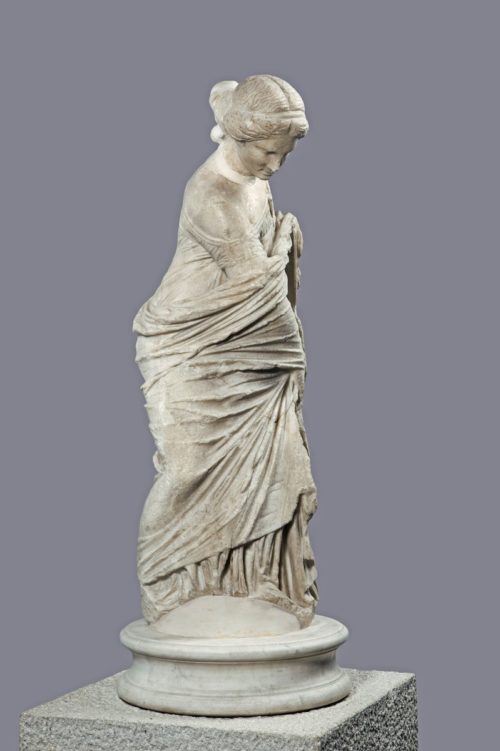 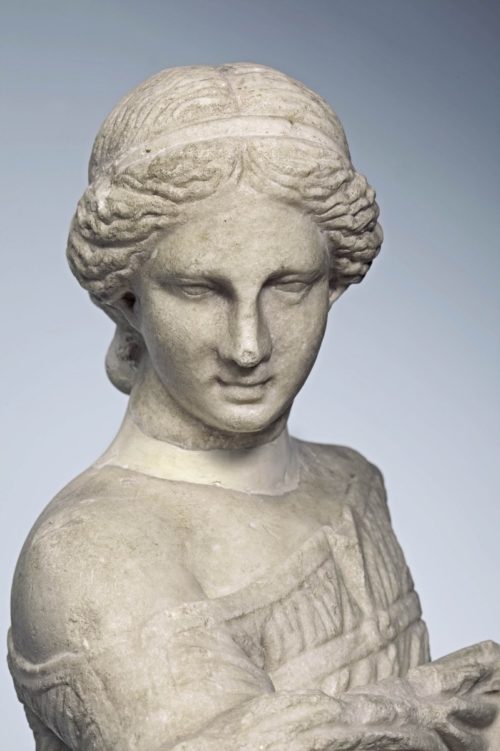 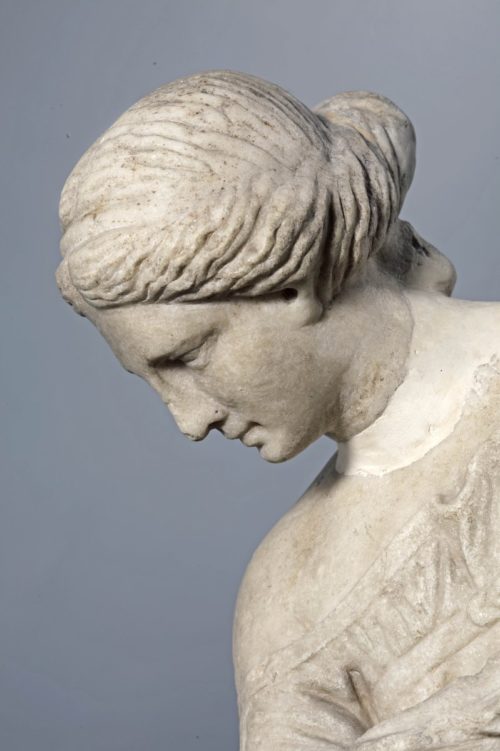 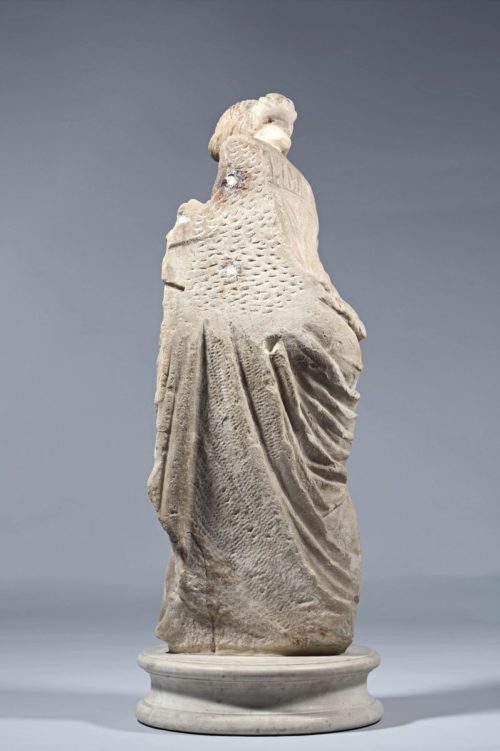 The statue known as “The Budapest Dancer” is one of the most famous ancient works of art in the Museum of Fine Arts. It represents a young girl bending forward and gazing before her as she pulls her garment aside. The seemingly simple pyramidal composition is constructed from the complicated interplay of gestures. Her weight rests on the outstretched left leg, while the right leg is pulled further behind; the upper part of the body leans towards the left and forward – a position earlier interpreted as a dance step. The thin girl wears a long chiton decorated with a trim at the neck, the garment has slipped from her right shoulder and covers the feet which have survived only in fragments. Above the chiton, held together by a sash across the breasts, is a thick himation, which the girl pulls to the side with her right hand, hidden under the garment, and tries to hold up with her (now missing) left hand. The mantle hangs down to the ground, its heavy weight forming the left side of the statue. Both pieces of clothing seem larger than necessary, and the contours of the body disappear in the thick drapery.
The girl’s hair, parted in the middle and decorated with ribbons, is twisted and pulled back into a bun at the nape of her neck. The head and neck do not fit; a geochemical analysis performed some years ago showed that the two parts are made of different marbles and did not, originally, belong together. Archival evidence suggests that it was Paul Arndt, from whom the statue was purchased in 1908, who pieced the two together, but as the supposed origins of the head are similar to those of the torso, the reconstruction is, in essence, accurate.
The back of the statue is only roughed out: the surface of the dress is here unfinished. The statue was clearly not intended to be seen from all sides. In addition, the left side of the upper part of the girl’s body was either carved or later replaced from a separate piece of marble. All this suggests that the figure of the dancer was destined for a niche. “The Budapest Dancer” owes its fame to being one of the best examples of the so-called closed, centripetal composition of early Hellenistic sculpture. One of the most significant innovations of this approach was the opening up of the artistic possibilities offered by the plurality of viewpoints, an invention of late classical compositions.
The figure’s movements are only understandable from the right, walking around it from side to side. These movements characteristically turn inwards, and not outwards, as became common in the later period of Hellenistic sculpture.
There is still ambiguity regarding the subject of the statue: it is unclear whether the figure represents a mythological person or a mortal being. The traditional interpretation considers the girl to be a dancer, even though the schema does not fit any of the known ancient Greek representations of dance. Several scholars have suggested that the manner in which the girl gazes before her, as if looking at her own reflection in a pool, means that the statue was originally placed in a niche above a well or fountain. Others suppose it is the immortalisation of a stolen moment, a genre statue of a girl adjusting her gown. Although there is still no unanimous agreement on the dating of the statue, it is generally held to have been created between 240–220 B.C. by a Greek master. 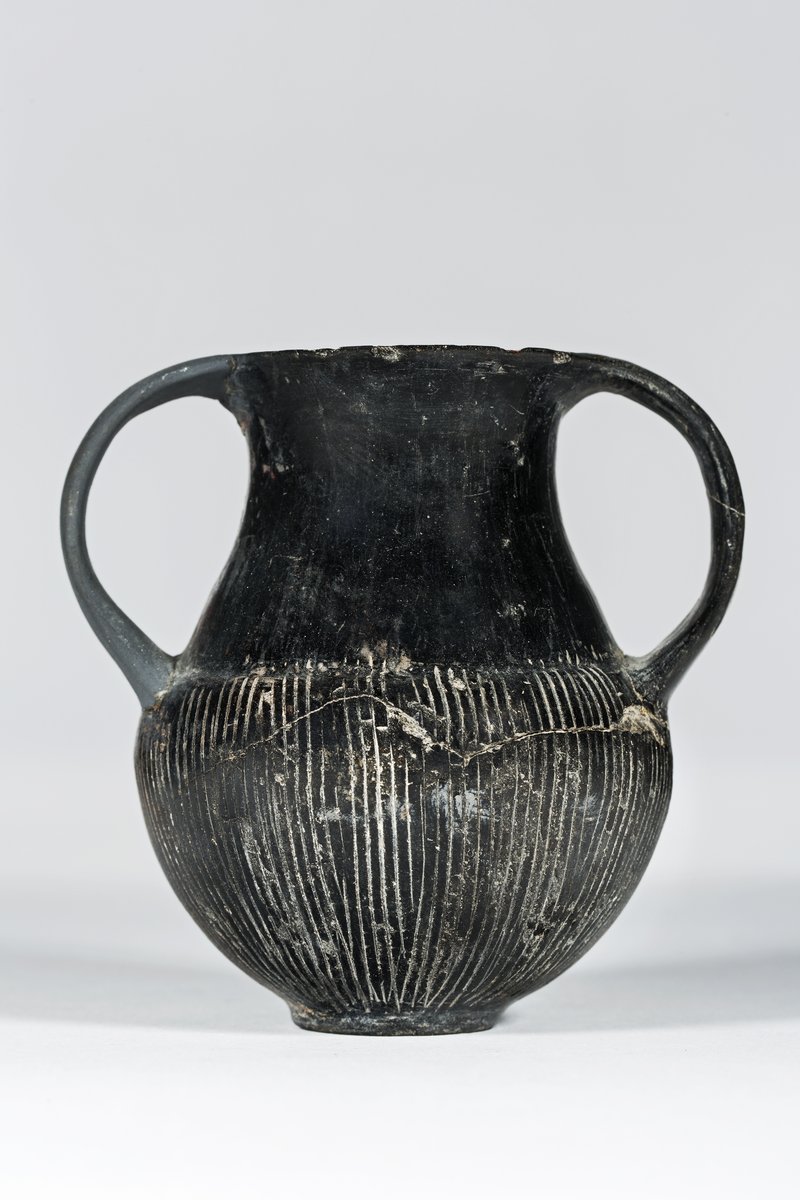 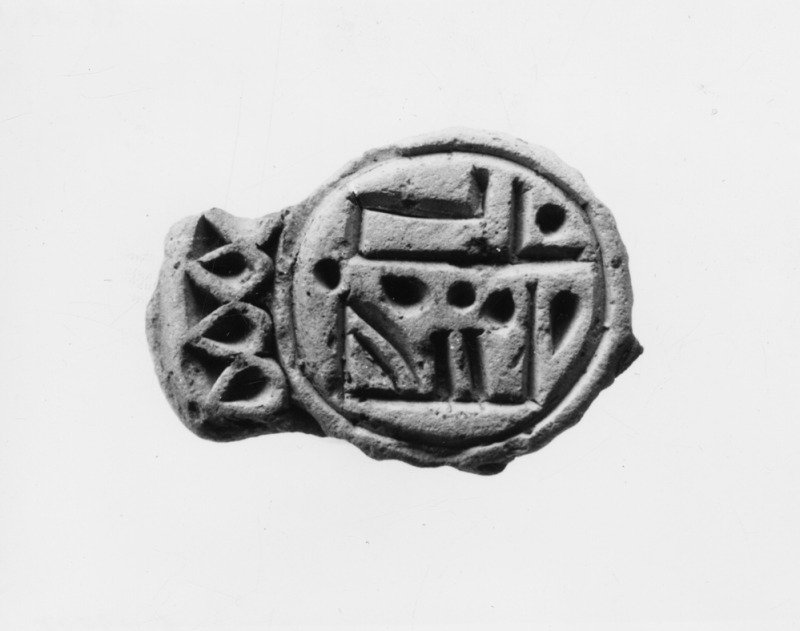 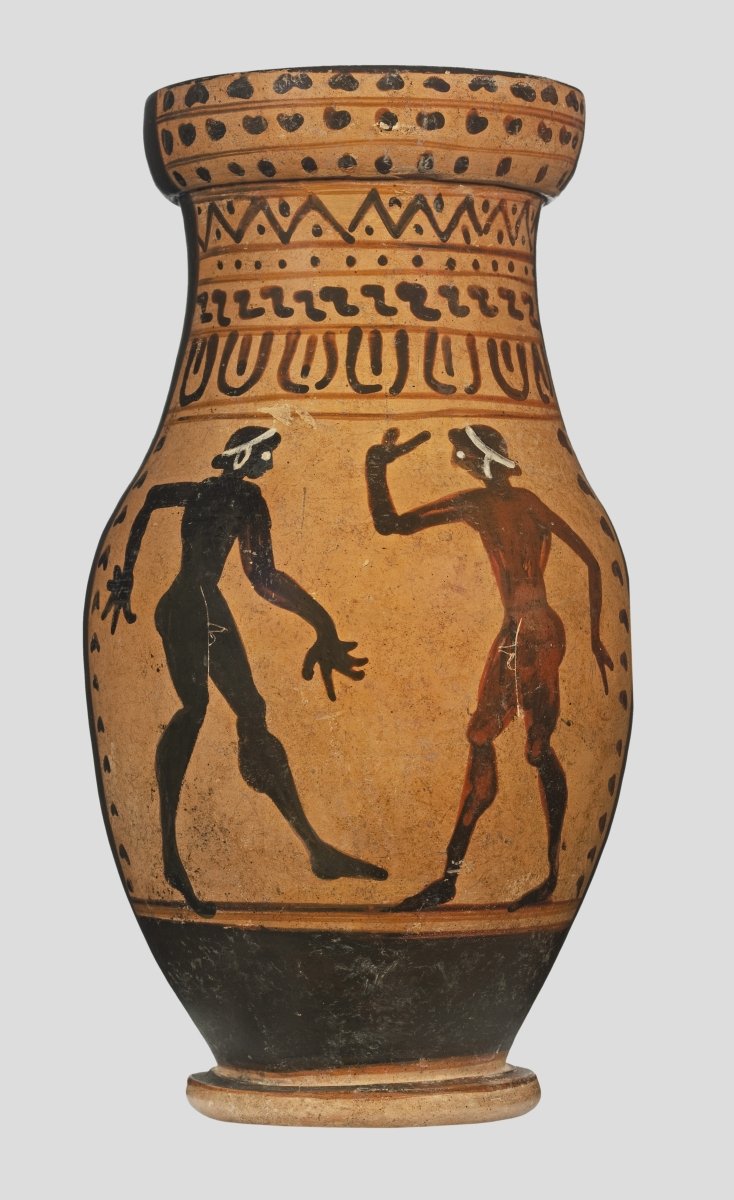 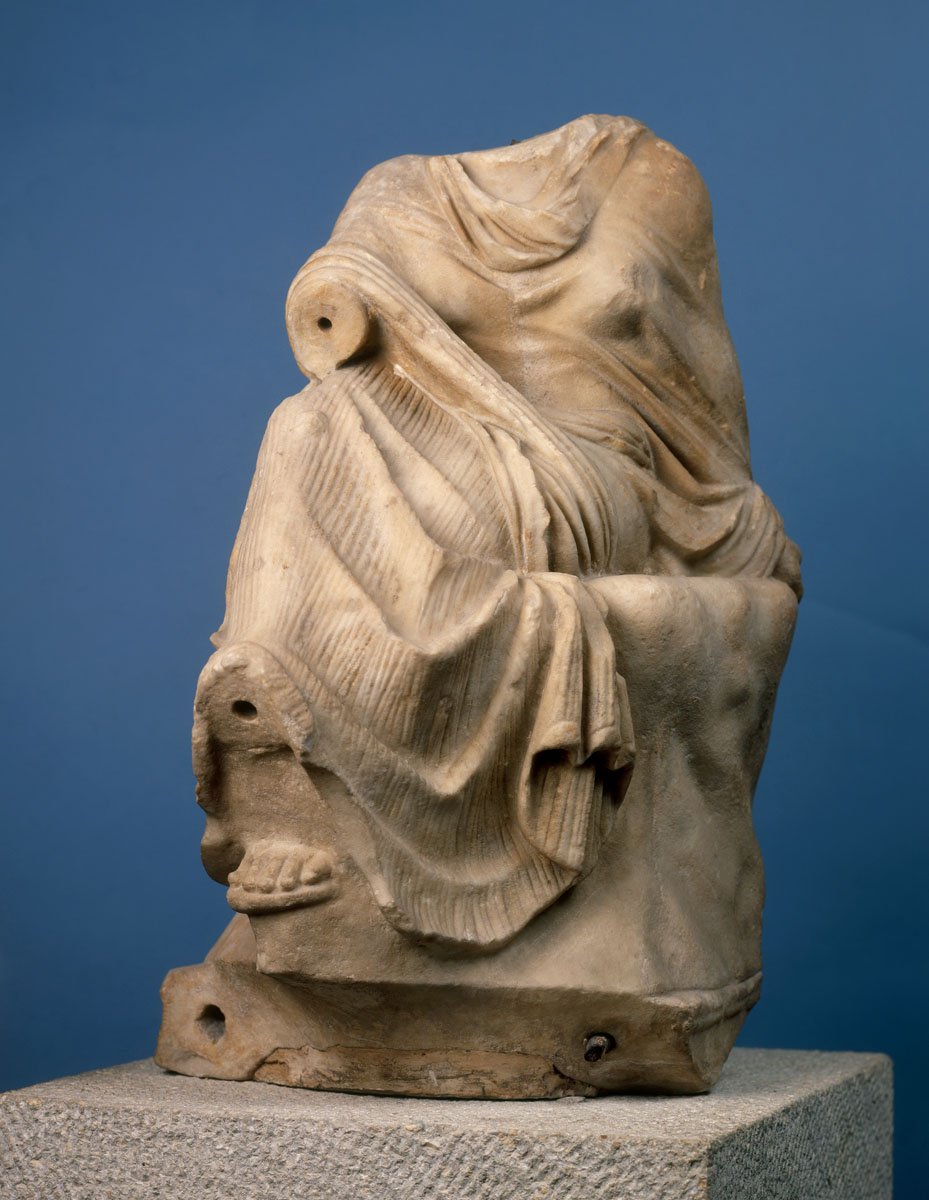 Patron goddess (Tyche) of Antioch. Roman marble copy of the original by Eutychides, made about 300 BC. 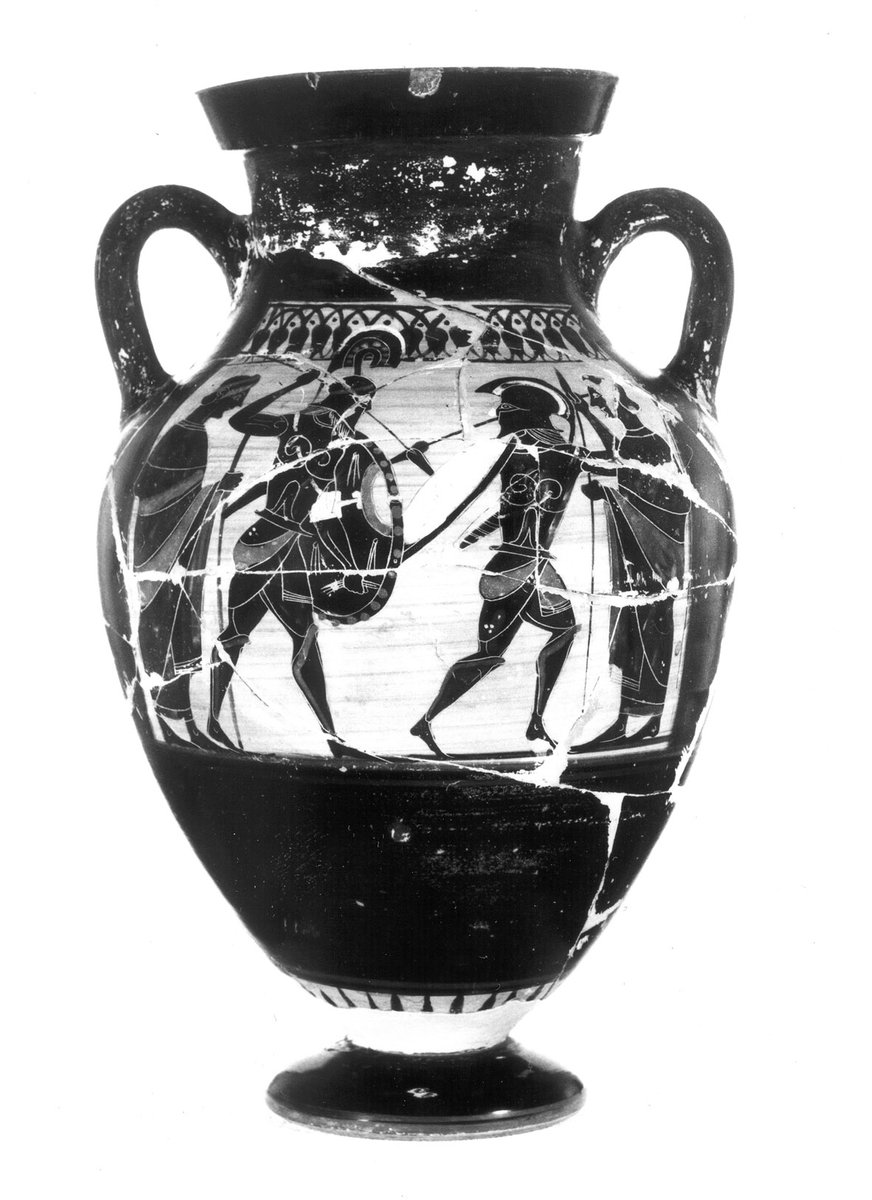 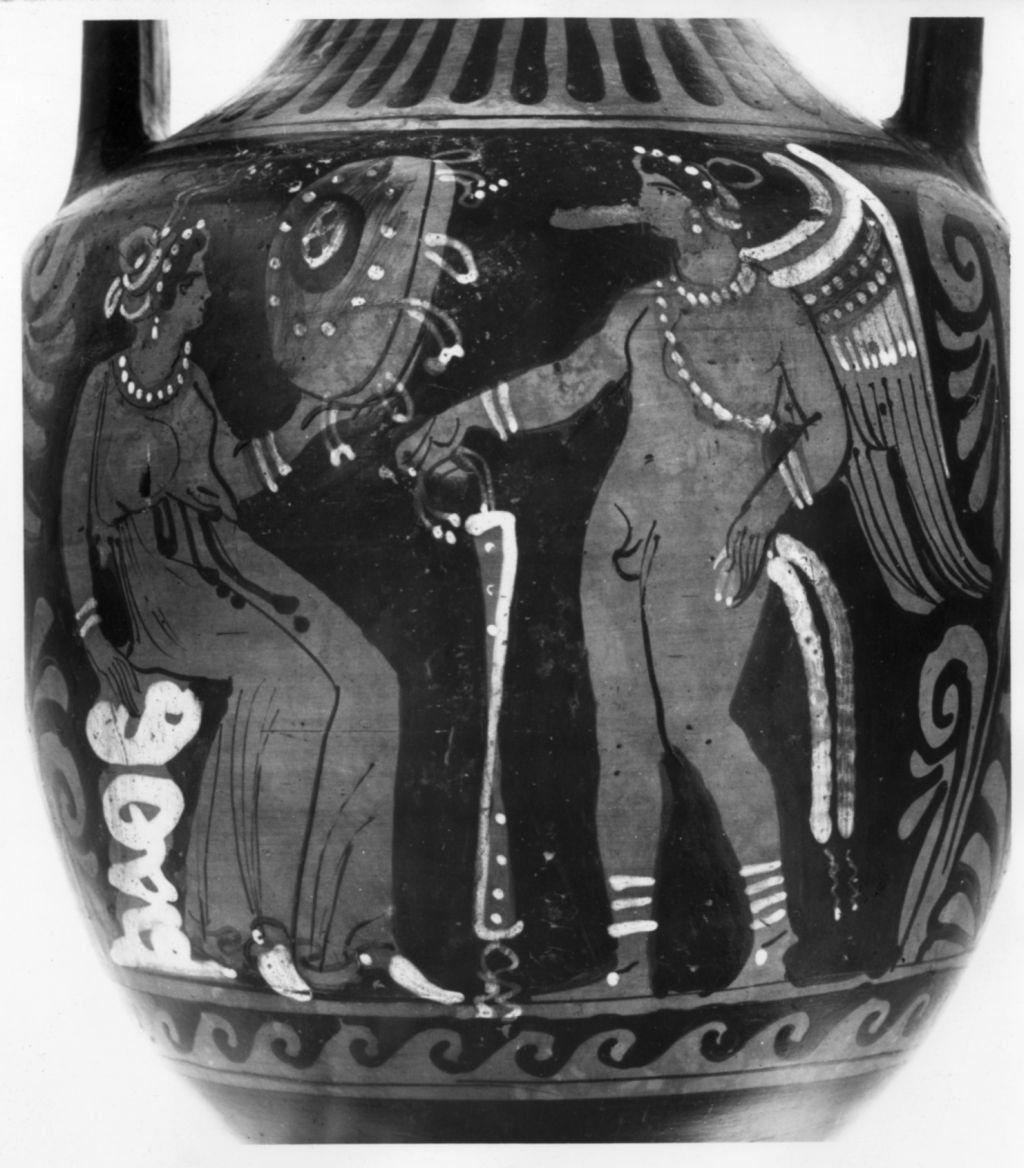 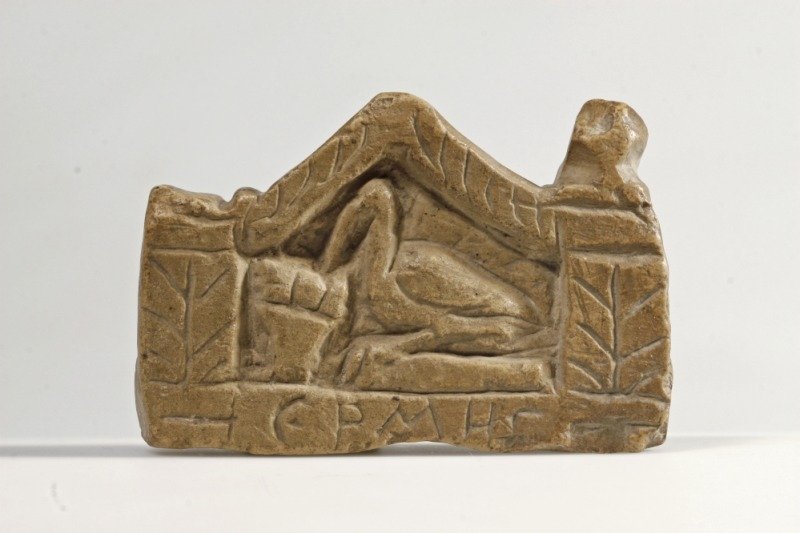 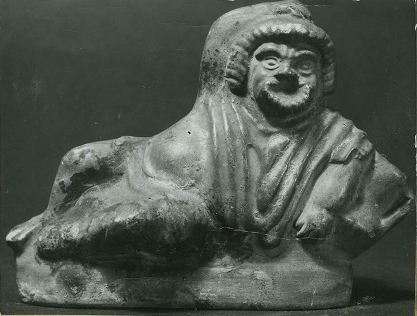 Plastic vase in the shape of a reclining comic actor 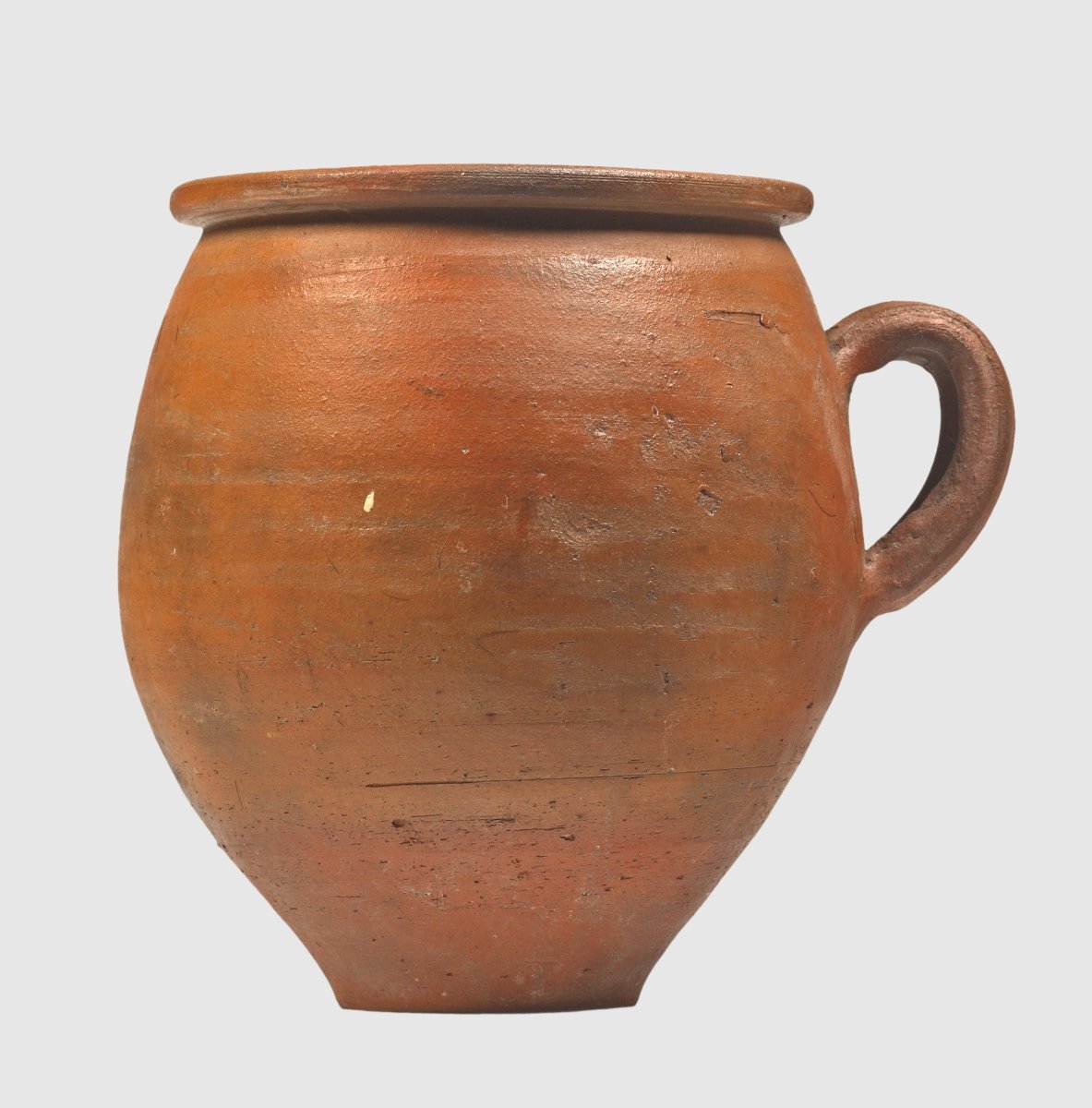 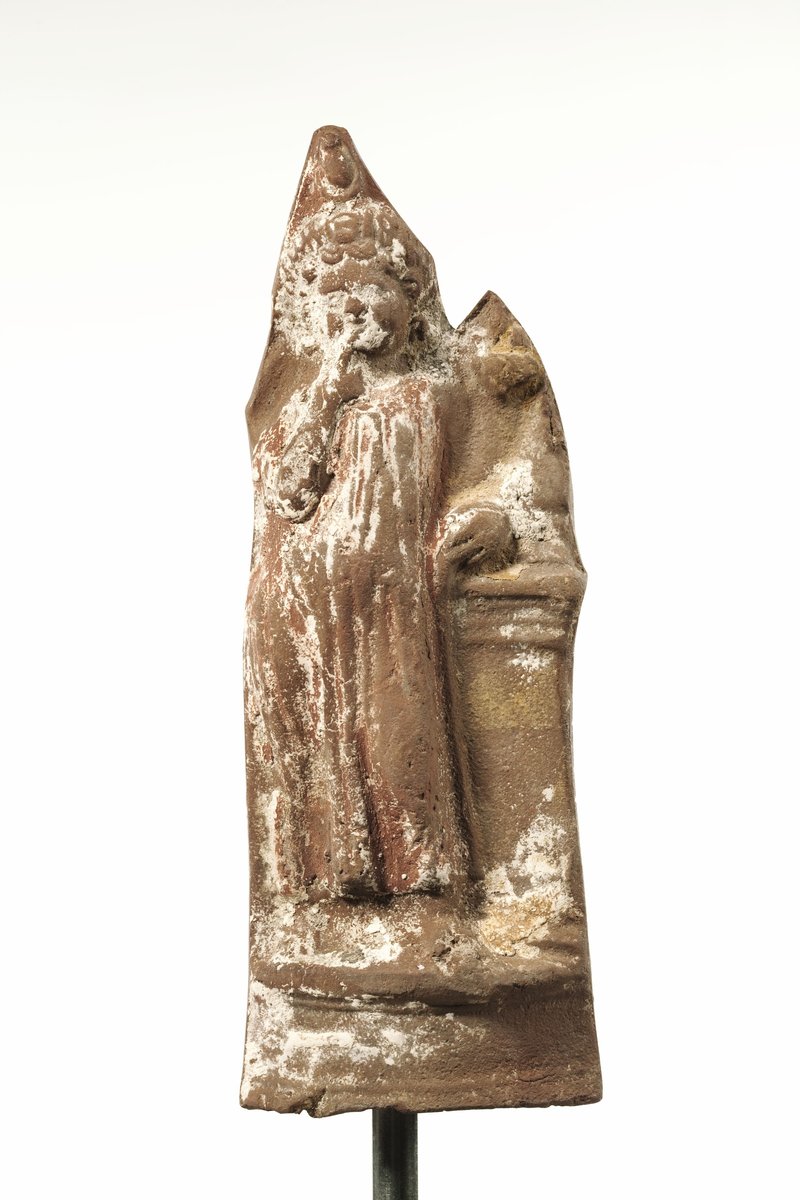 Figurine of Harpocrates with Falcon and Cornucopia