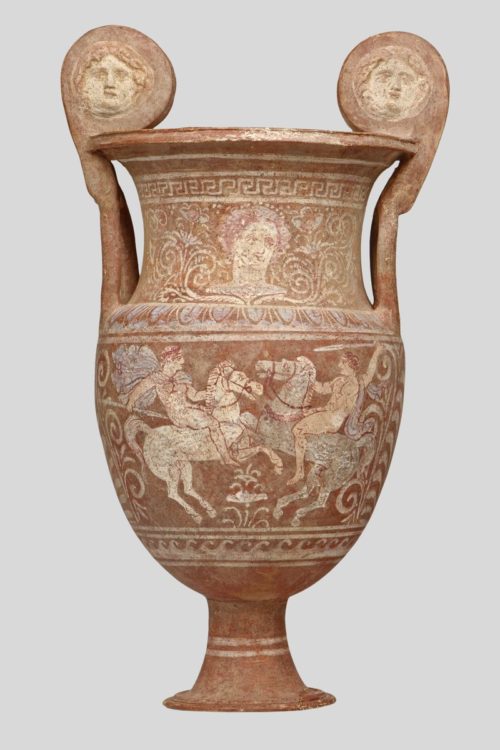 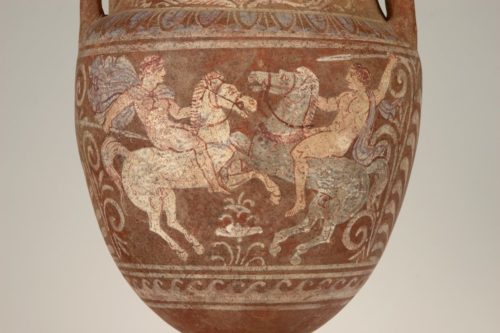 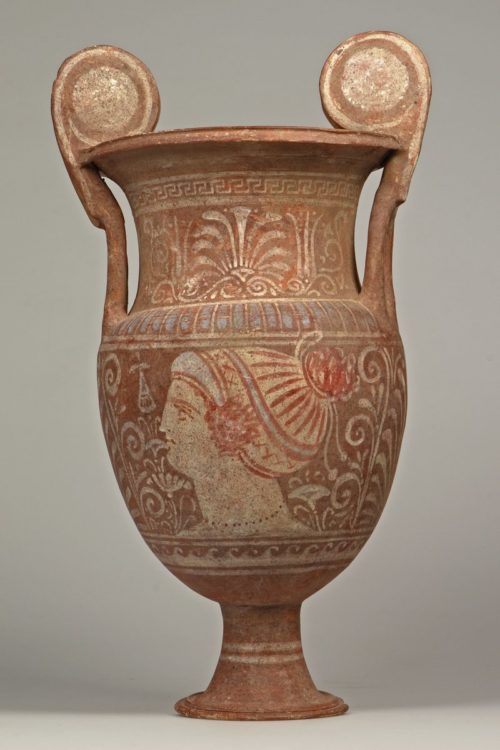 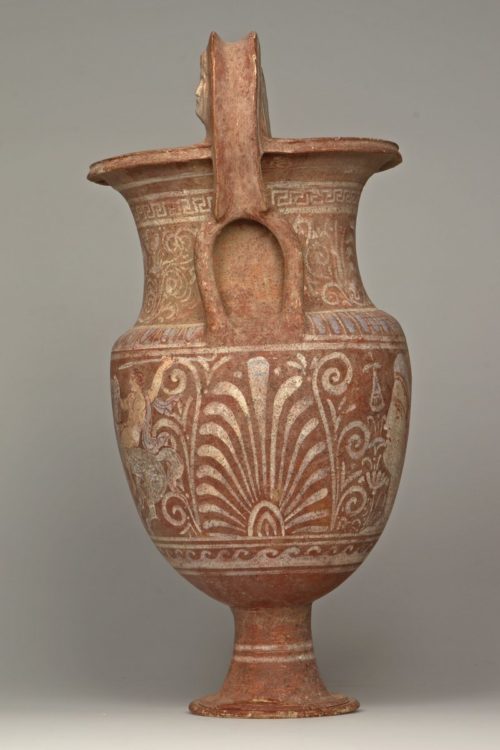 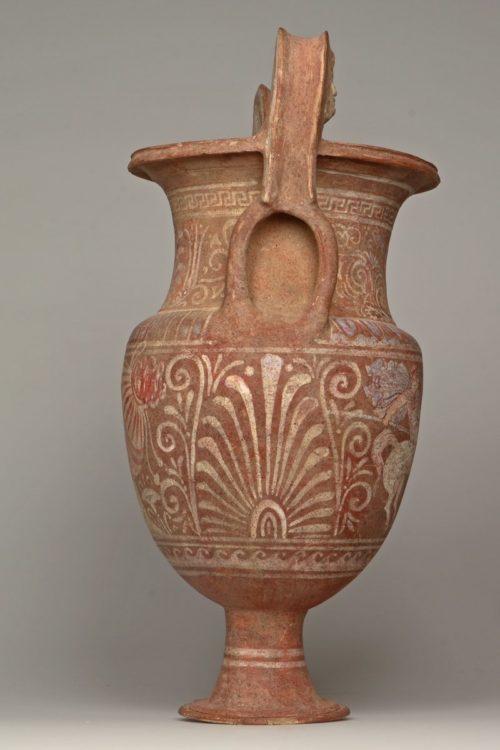 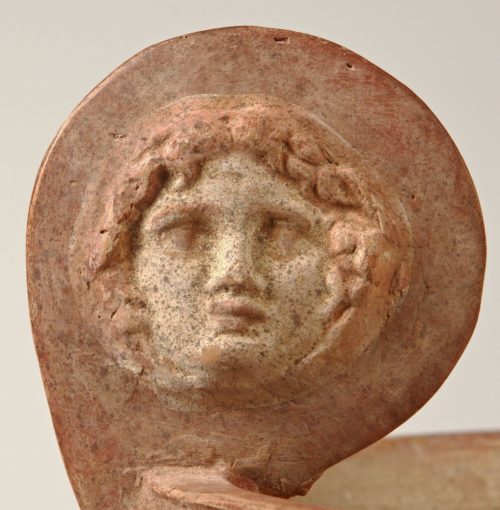 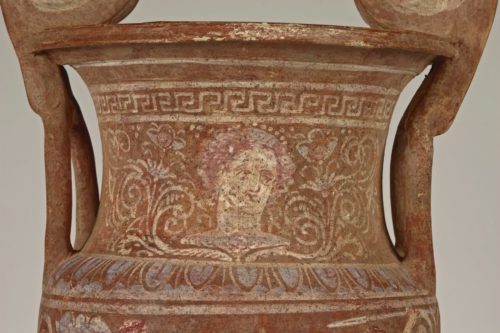 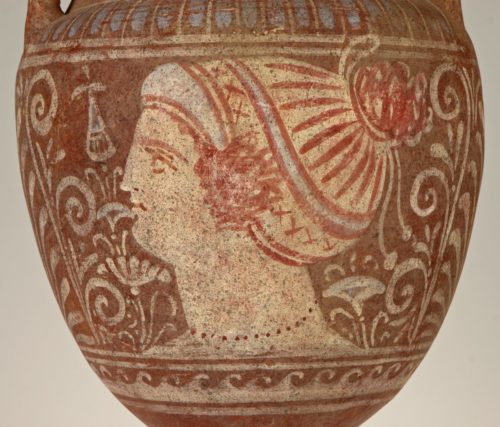 The krater, a large, wide-mouthed bowl for mixing wine and water, came to play an indispensible role in Greek feasts and the rituals of convivial drinking (symposion) which followed. The more opulent examples were made of bronze, and at times were almost as tall as a man. Painted pottery pieces decorated usually with figural scenes have survived in much larger numbers. One type is known to archaeologists as the volute krater from the way the long vertical spar, which continues above the horseshoe-shaped handle, ended originally above the rim of the vase in a spiral volute. It originated in Sparta. In the 6th and 5th centuries B.C. this shape was popular in the workshops of the Athenian potters’ quarter. This Attic ware, delicately made and painted, proved a popular luxury article in the export trade to Etruria, Sicily and Magna Graecia, where immigrant Greeks lived for centuries in a state of close cultural reciprocity with the native population. In the first quarter of the 4th century, the volute krater disappeared from the Attic potters’ canon, but enjoyed a considerable vogue among users of locally-made South Italian pottery, especially in Apulia (modern Puglia). Between about 375 and 350 B.C., a new type developed here, which had discs in place of the earlier volutes. The discs bore brightly painted relief masks. One such example was acquired by the Collection of Classical Antiquities.
In the local South Italian pottery industry vases were most often painted in the so-called red figure technique, in which the figures, reserved in the natural red colour of the clay, rise out of the surrounding glossy black or chocolate-brown glaze. Red-figure painting first appeared around 530 in Athens, and dominated Attic production for two centuries in Attica, it fell out of fashion and disappeared around the thirties of the 4th century. But the technique survived in the great South Italian workshops of the 4th century. Red figure ware was produced there in great quantity, moreover local masters expanded the inherited technical canon with new techniques and striking effects of colour. Here at this time the most significant centre of vase-painting, in terms of artistic quality and influence, was the important seaport town of Tarentum (Taranto). One important centre of technical innovation was the Apulian town of Canosa, whose master potters and painters, without breaking entirely with the inherited methods of their tradition, proved both courageous and remarkably successful in their introduction and exploitation of new methods of vase-decoration.
Ancient Canusium, lies a few kilometers from the Adriatic on the south bank of the river Ofanto (ancient Aufidus), on the southern edge of the territory of northern Apulia known in Greek and Roman times as Daunia. The excavated remains of local pottery workshops show that the town was a centre of ceramic production already in the seventh and sixth centuries B.C. The interest of the local Italic population in Greek import wares is attested already in the archaic period by numerous finds. The culture of ancient Canosa was marked throughout its history by a successful symbiosis of Greek and local elements. It acquired its urban form in the 4th century. In the second half of the century, while the import of Greek ceramics continued, it was an important market for the best masters of the flourishing red figure pottery industry of Tarentum. In the last third of the century, pupils of these Tarentine masters opened large-scale workshops in Canosa, applying new techniques of decoration as well.
With its unique painted decoration the Budapest krater is a rare example of this group. The vase differs in proportions but not in shape from other red figure kraters, but its decoration is, as it were, the opposite of the usual Attic technique. The ornament was painted over the reddish-brown glaze which covers the whole surface of the vase. With its use of multiple added colours, it is clearly a forerunner of 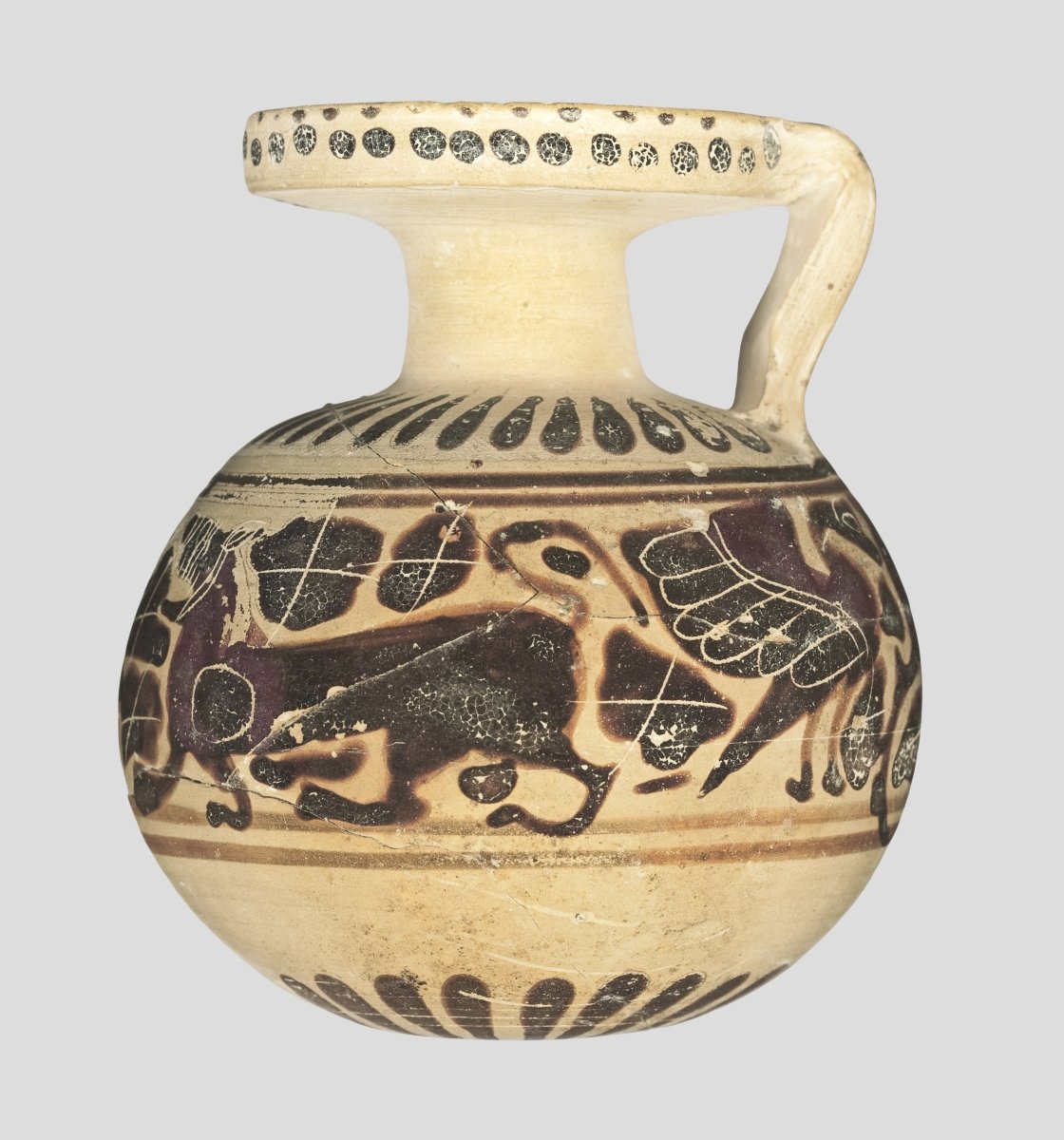 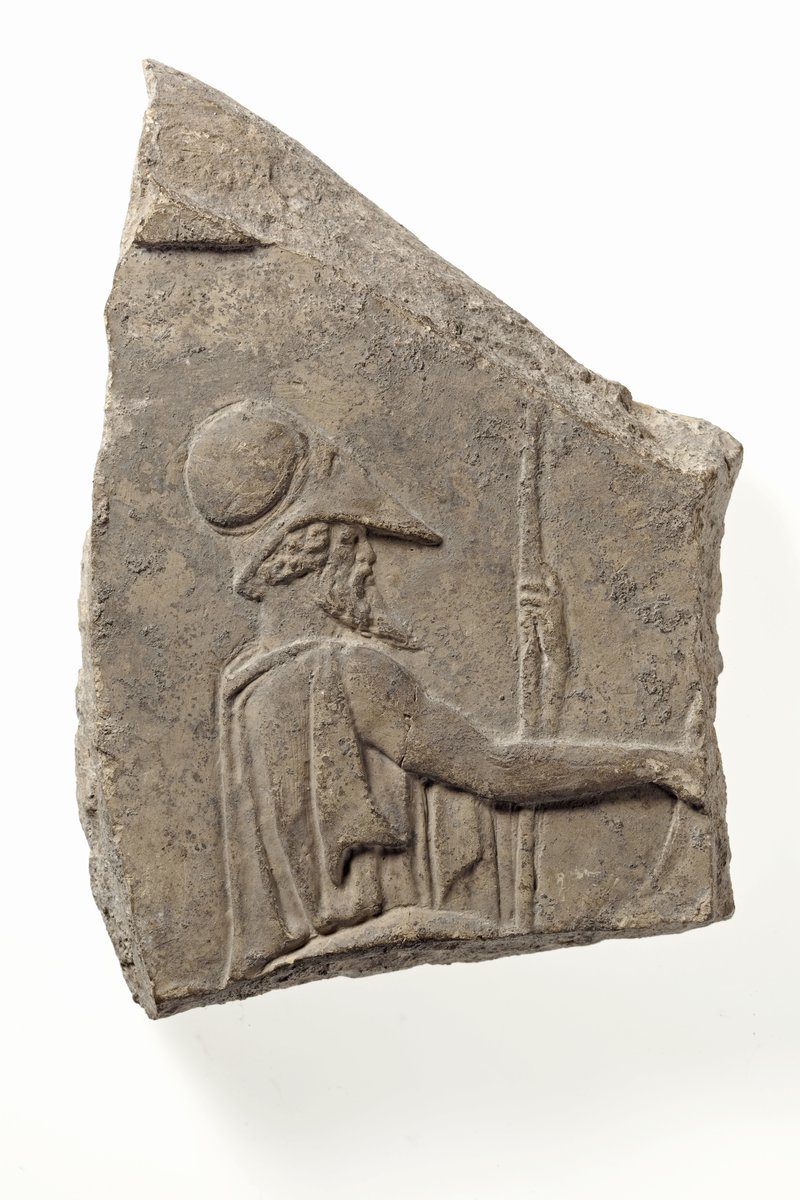 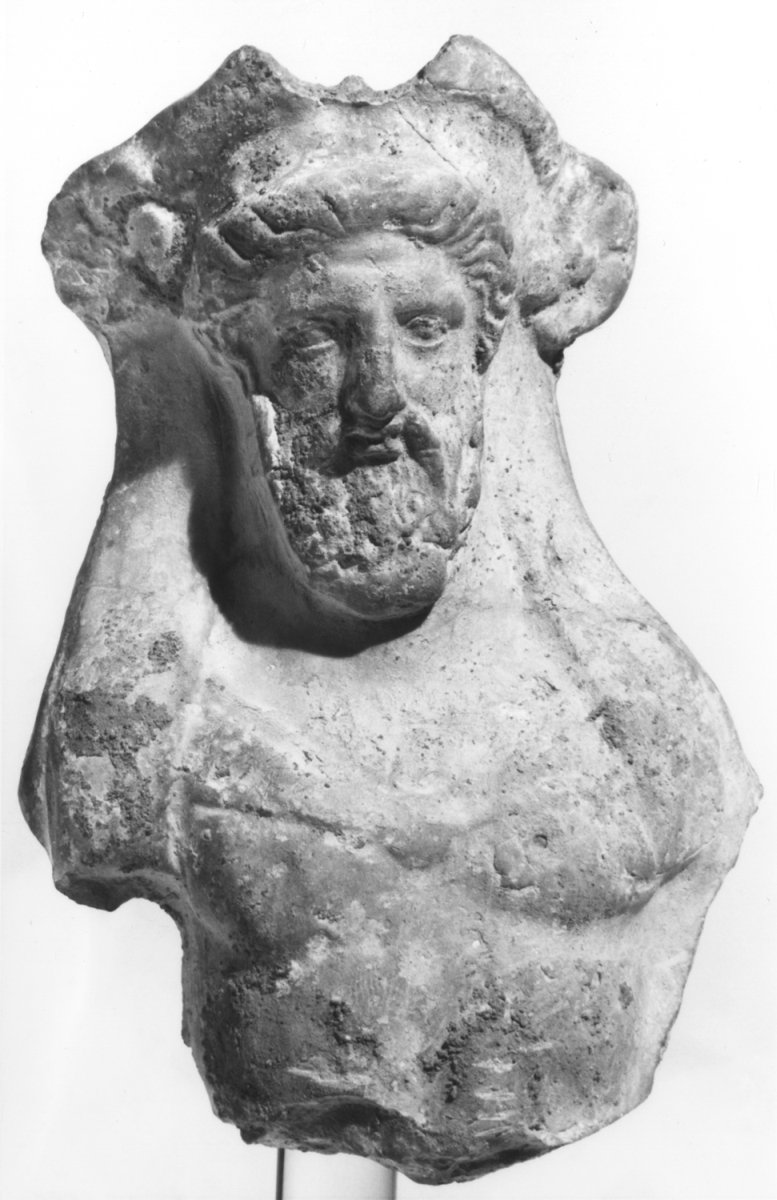 Statuette of a Bearded Man with Wreath from Tarentum 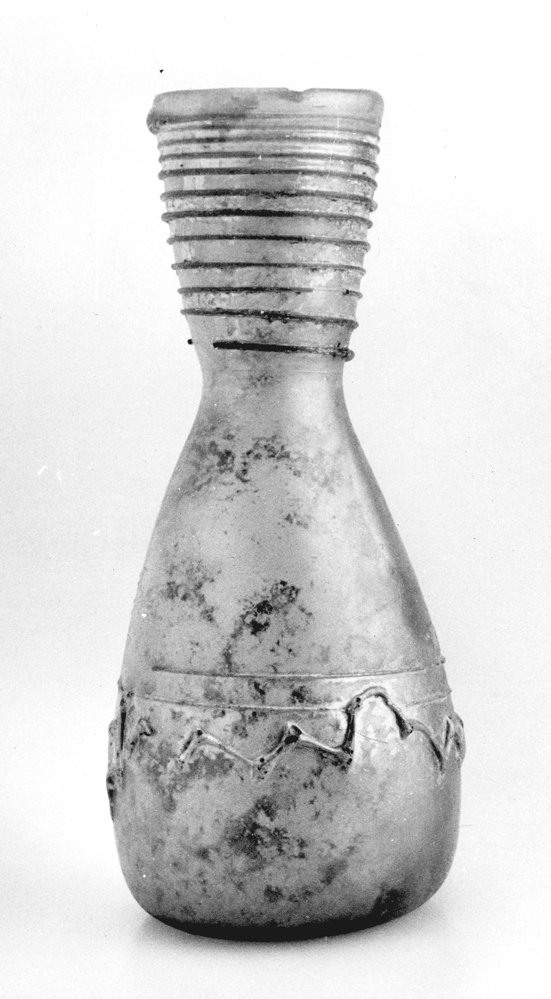 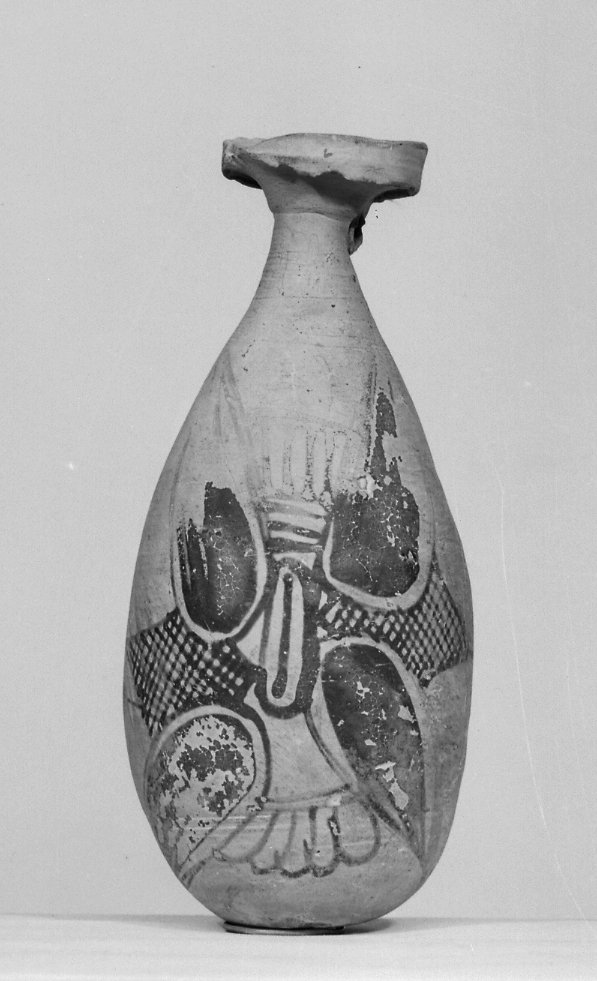 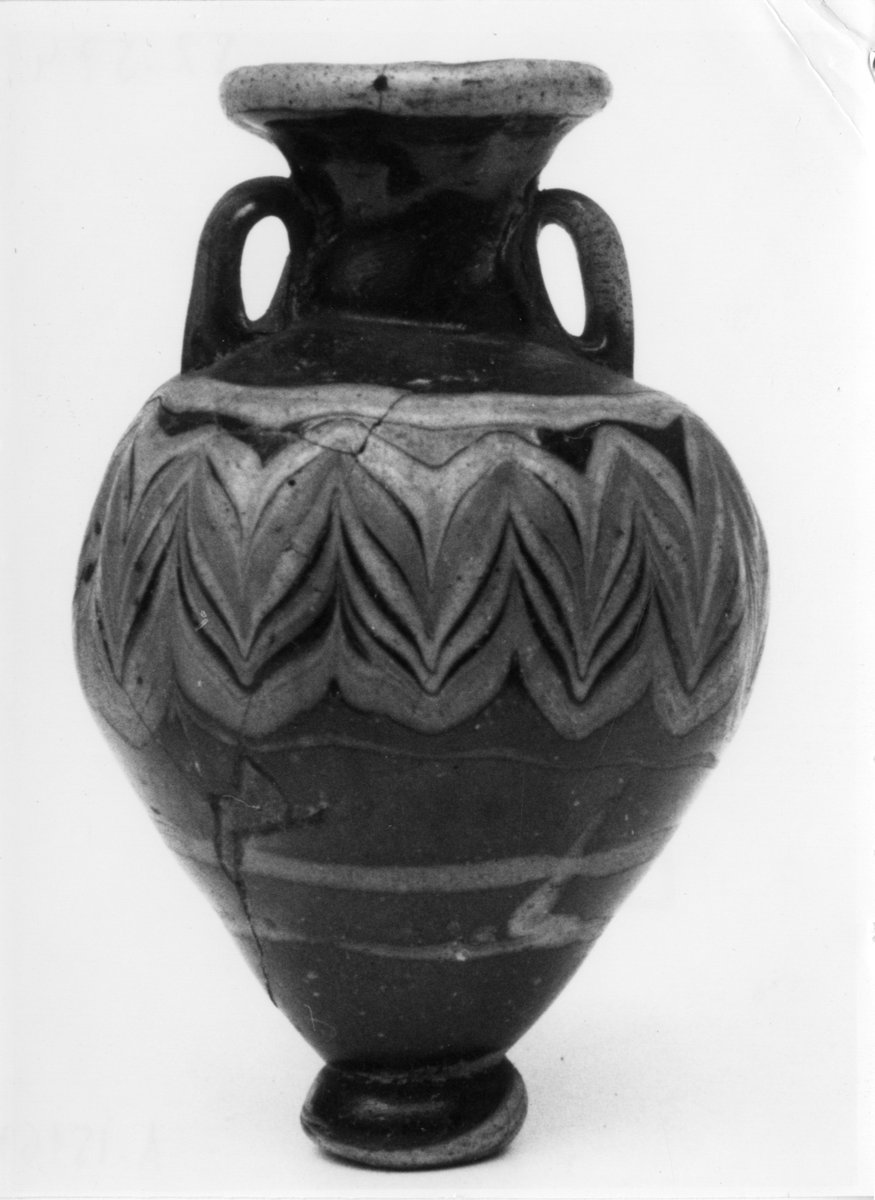 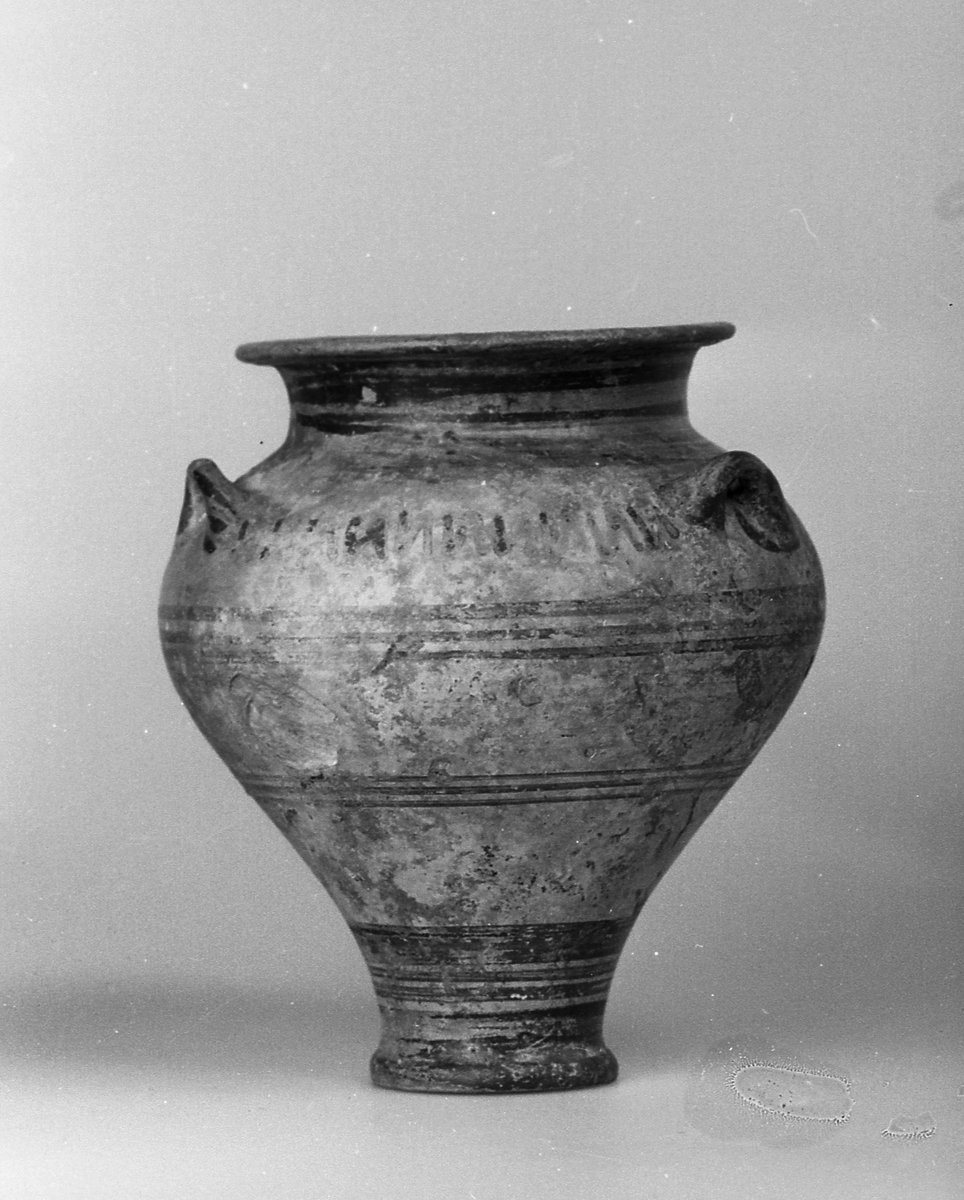 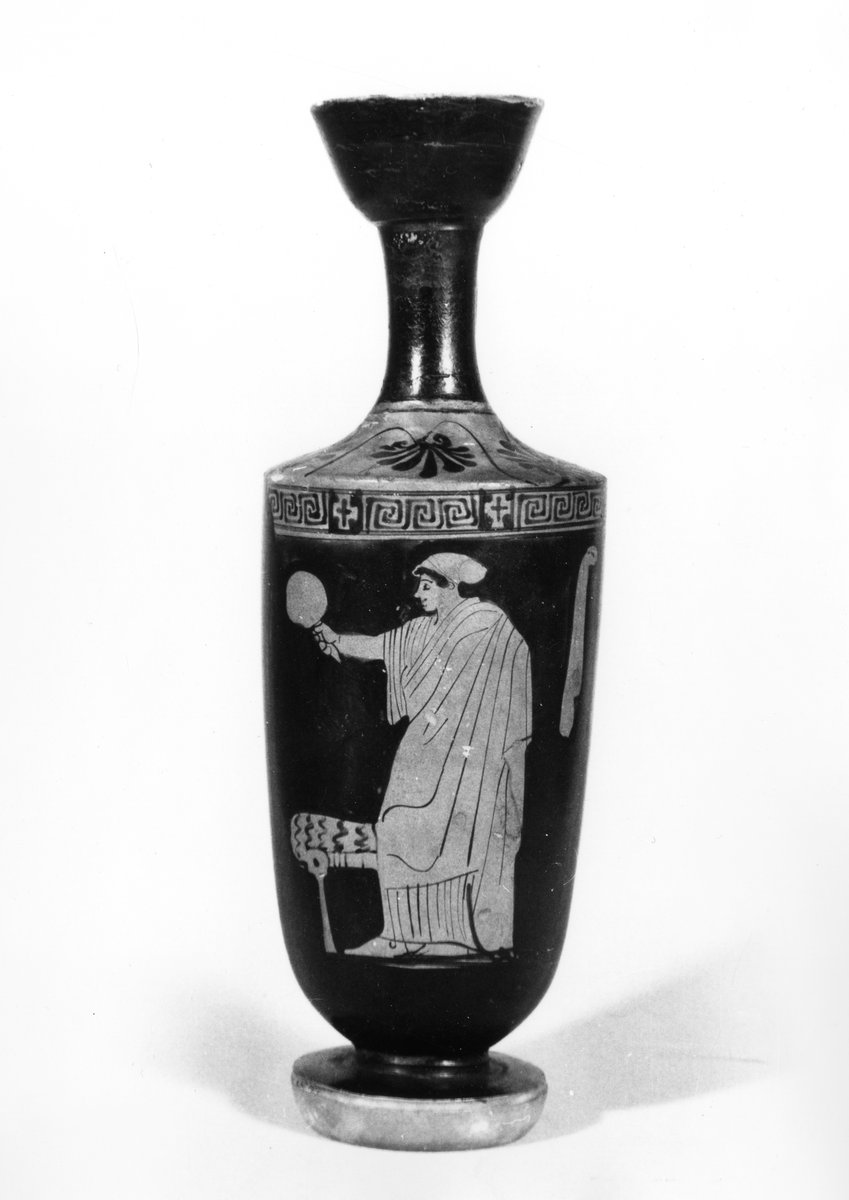 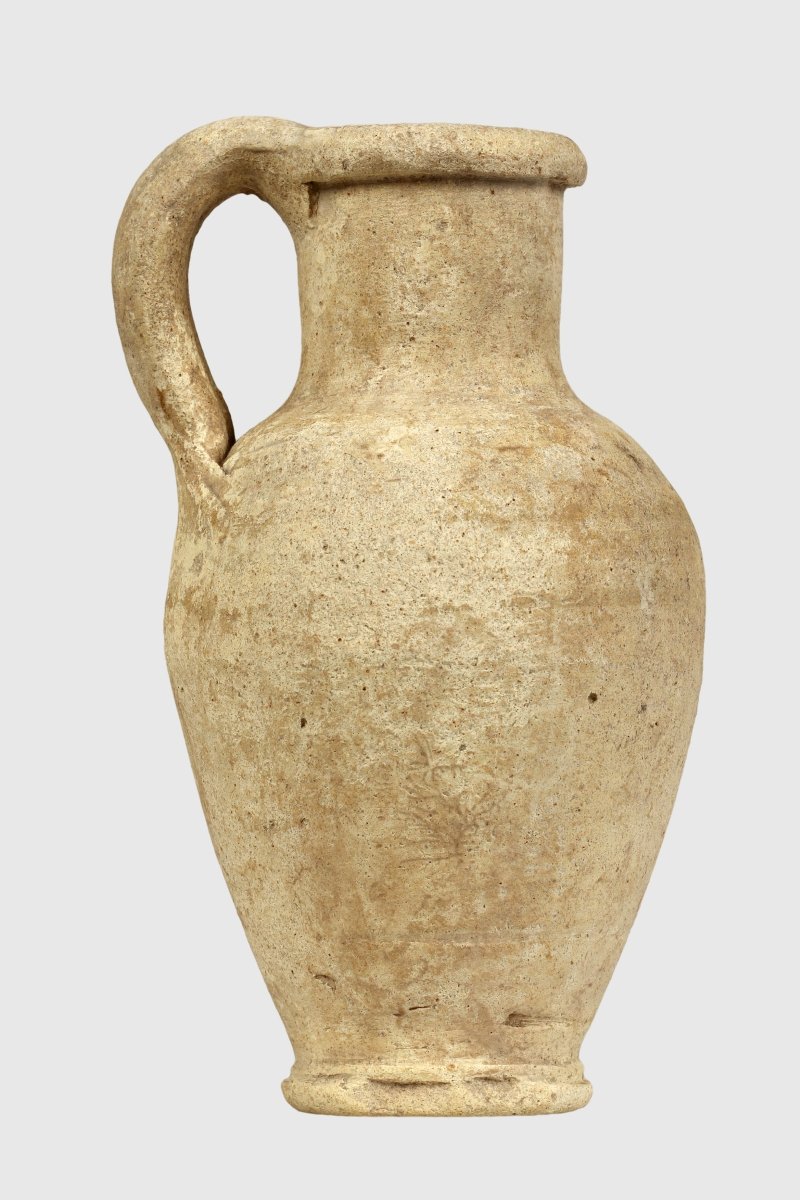