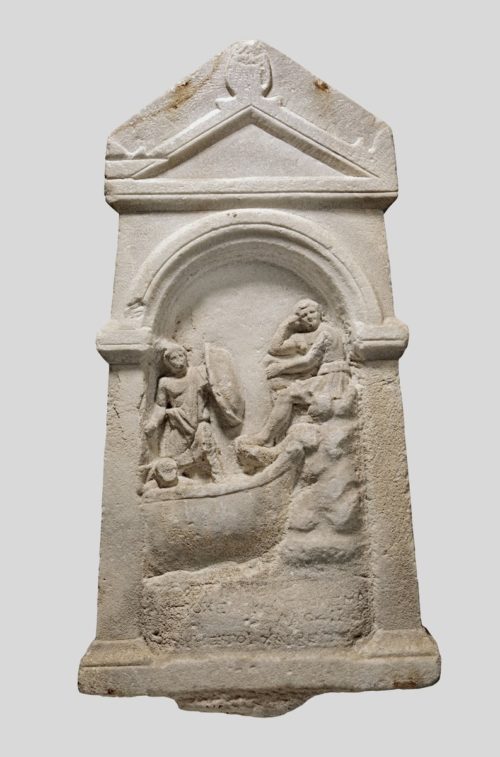 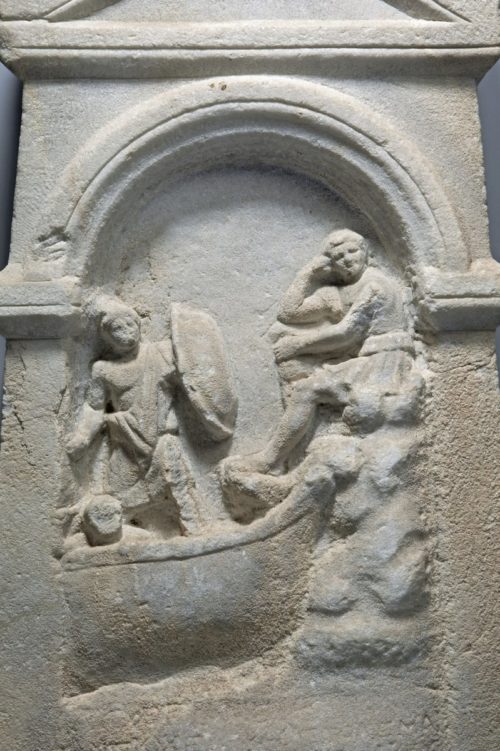 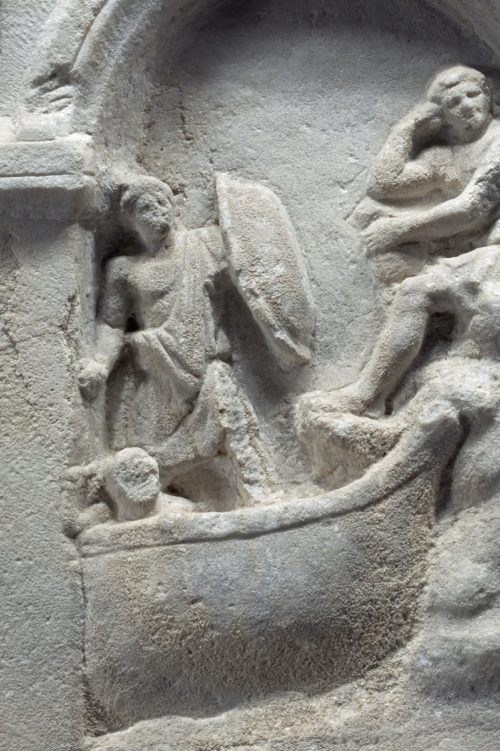 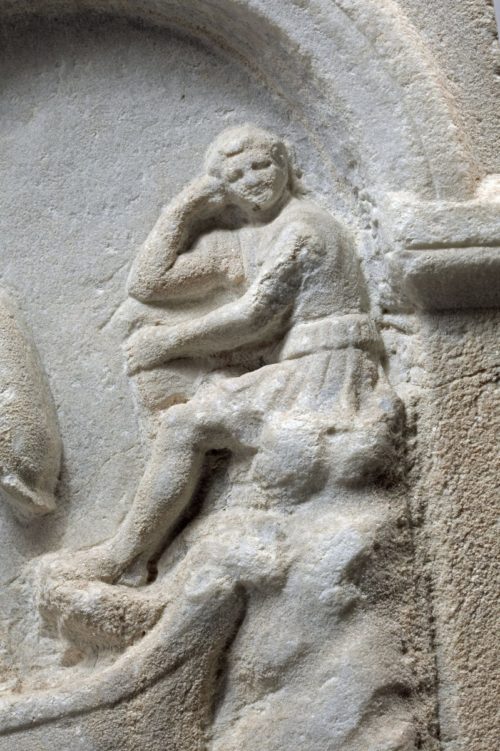 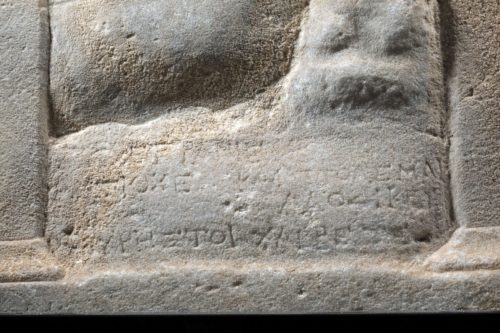 The stele, made of a greyish-blue Parian marble, takes the architectural form of a temple, consisting of a pediment and an arch supported on two pilasters. This architecture frames the figural image of the relief as well as the inscription below it. The composition is made up of two parts. Although both iconographical schemes are well known from contemporary funerary art, the relief offers the only known example of a combination of the two. On the left we can see a small, broad boat with high sides and a high prow; the absence of a ram suggests that it is a trading vessel. The sea is indicated by a line with waves. Two figures appear in the boat: a small figure – his face is broken off but the head is still visible – looks over the railing and holds a sword in his raised right arm; the other figure stands on deck and thus nearly his whole figure is visible. He lunges forward on his left leg; he holds a sword in his lowered right hand, and his left is raised, holding a shield, to protect his body. This standing figure wears a girt, sleeved chiton, and it is noteworthy that he fights with his right arm freed from his tunic to allow maximum freedom of movement, and thus his right sleeve hangs down in front of his body in a loose, large, V-shaped mass. This also leaves his upper body partly uncovered, and this nudity might be intended to characterize the warrior as ‘heroic’. On the right side of the relief, another man sits on a high rock, which appears to be conceived as behind the boat’s prow. The man wears a cuirass, and thus is a soldier. His left arm rests lightly on his raised right knee; his right arm is bent, he rests his head on his right fist, a typical gesture of mourning in ancient art.
An inscription is incised below the relief, naming two men: one is Aulos Granios Antiochos, which indicates a Greek with Roman citizenship, while the other is Ptolemaios, derived from the kings of Hellenistic Egypt, who came from one of the eight towns named Laodikeia. He traveled to Greece from far away, and was perhaps a slave of Aulos Granios. The third line of the inscription contains a formulaic expression of farewell, with which mourners parted from their loved ones.
The name of Aulos Granios is written on the left half, below the fighting figure, that of Ptolemy appears below the seated figure. This juxtaposition raises the question of whether we should interpret this image as two separate, unrelated scenes in the lives of the two men, or as scenes of their common story in a ‘continuous narrative’. Parallel stelai render the latter hypothesis more likely: the relief depicts two aspects of the same story: it serves the memory of a warrior (or warriors) who died while defending this trading vessel against an enemy, such as a pirate attack, and is depicted once in heroic action and again as the deceased soldier mourning his own fate. This interpretation is supported by the fact that the heads of both men have the same overall form, the hairstyle with short hair is similar, and both are beardless. But of course, the size of the depiction, the damage to details, and the general character of the faces do not allow a definite answer to the question if there are two portraits or only one.
The relief is typical of a large group of such funerary monuments, consisting of more than 500 stelai, found on the small island of Rheneia located near Delos. Rheneia served primarily as a cemetery for the inhabitants of Delos, where – being the most important religious places for Greek religion (it was here that the goddess Leto gave birth to the twin gods Apollo and Artemis) – it was prohibited to bury the dead. Since archaic times, the Delian sanctuary was enlarged and received many impressive marble temples, and buildings, such as stoas, a stadium, and harbour installations. In the Hellenistic period, huge and lavishly decorated villas were built; these dwellings belonged to rich merchants and societies of traders, who used the island as base in the Mediterranean. Delos became the center of trade in this region. In 166 B.C., Rome freed Delos from paying taxes, which fostered an economic boom that brought thousands of inhabitants to Delos from all over the ancient world.
Even though the find spot of the Budapest relief is not known, we can be certain that the stele was found on Rheneia, not only because of the type of the funerary monument, the type of marble, and the style, but also because one of the men named in the inscription: two other inscriptions found on Delos give the name of two different men named Aulos Granios, both donors of votive offerings, both living around 100 BC. The relief’s style, as well as the lettering of its inscription, indicate that this stele should be dated to the same period. It is possible that one of the two donors on Delos known as Aulos Granios is commemorated by this relief.
The marble relief from Rheneia was donated to the Museum on the occasion of the centennial of the Classical Collection in 2008 by the Ministry of Culture and Education. The stele was bought on the art market, but had belonged to an English private collection for a long time preceding. 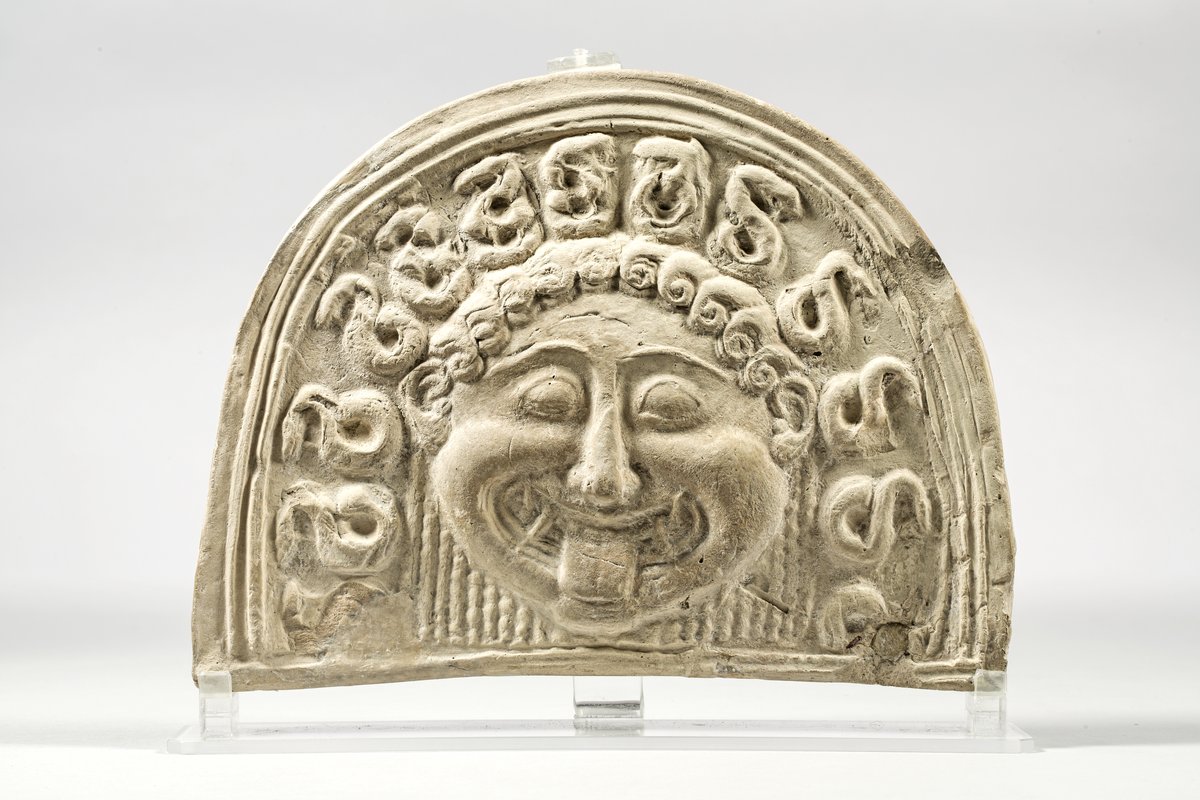 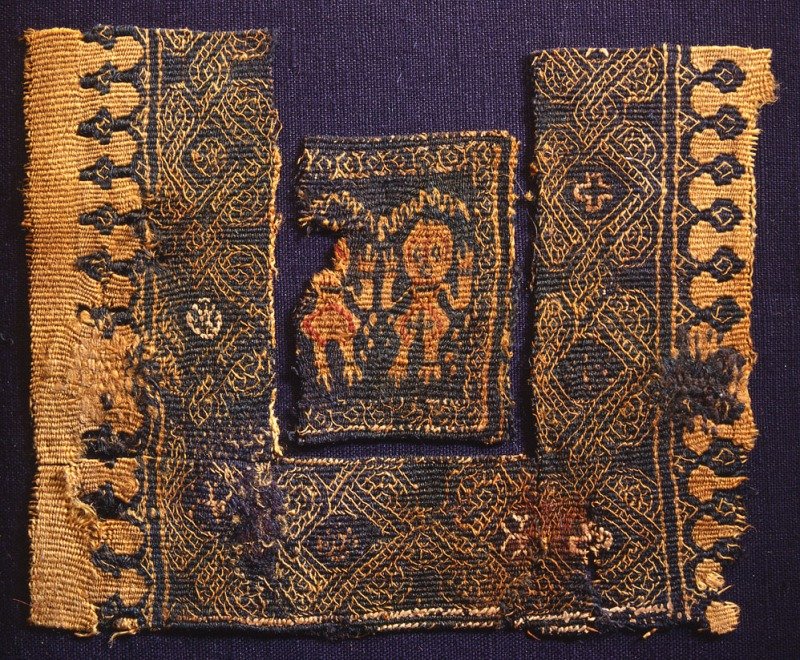 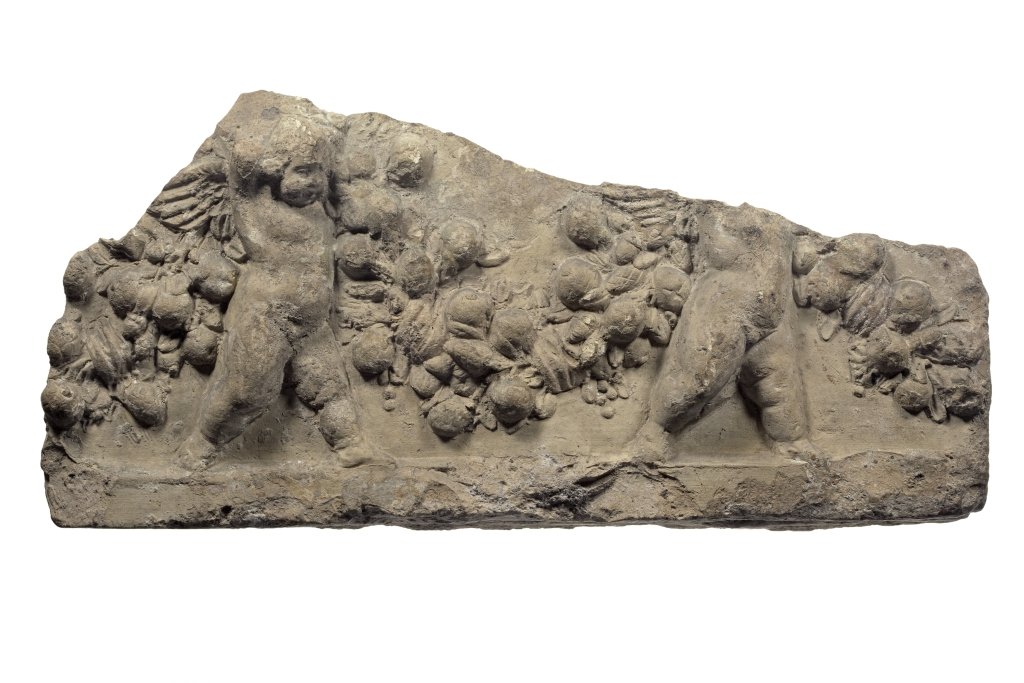 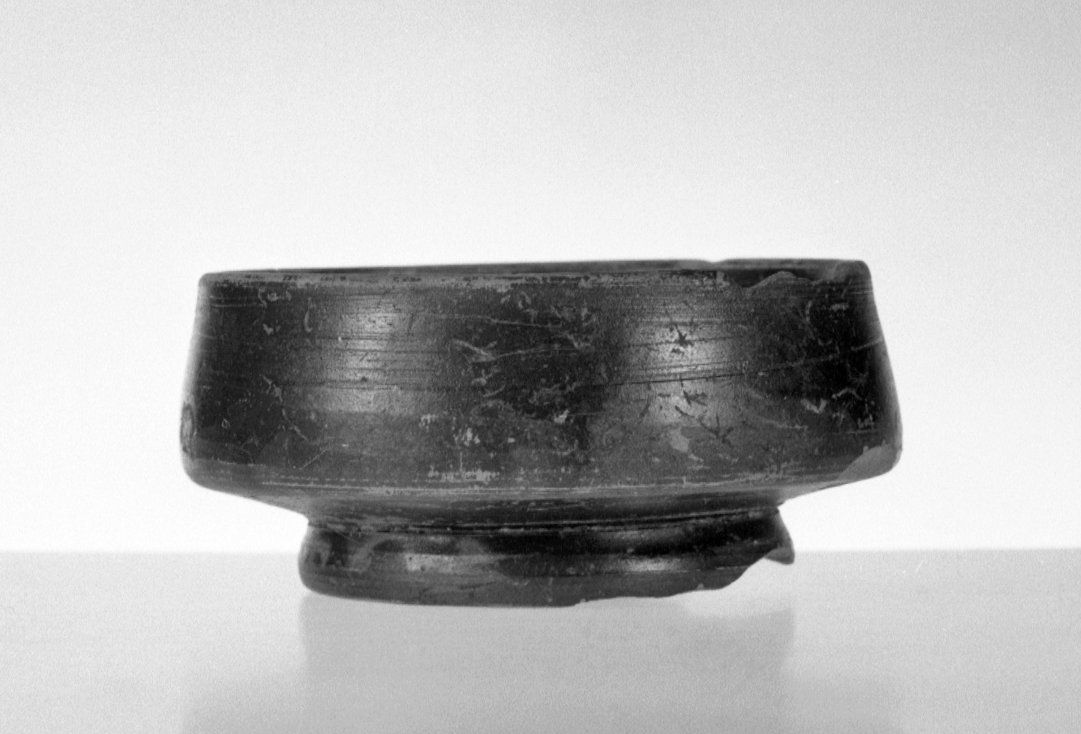 South Italian black-glazed cup from the area of Melfi 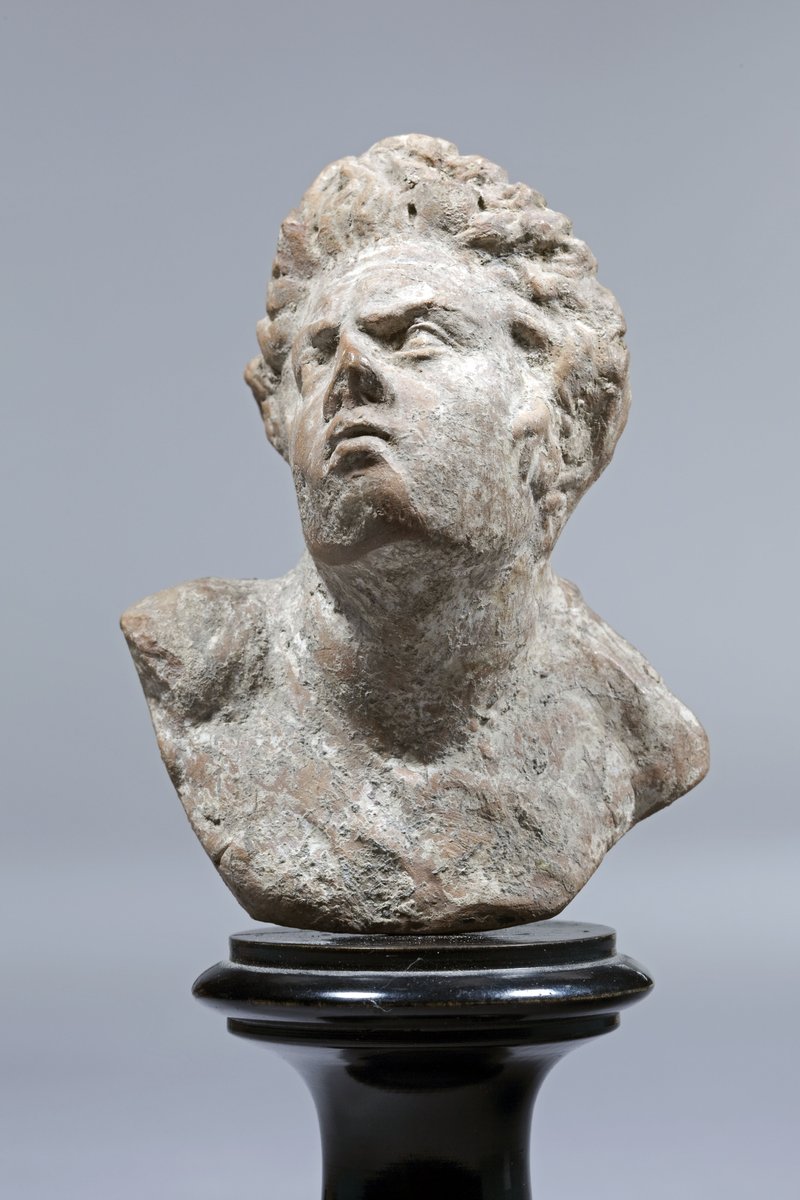 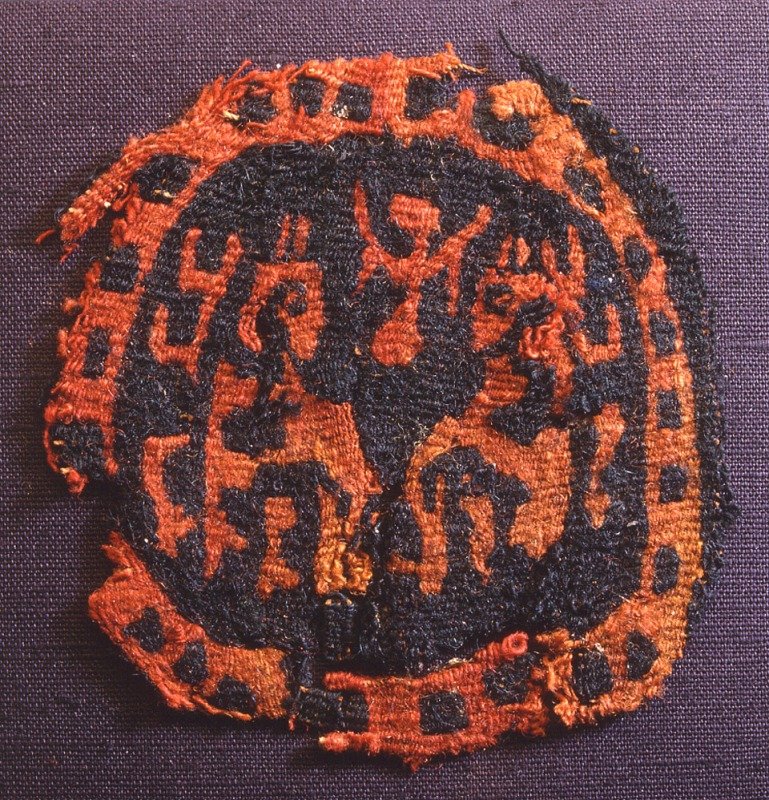 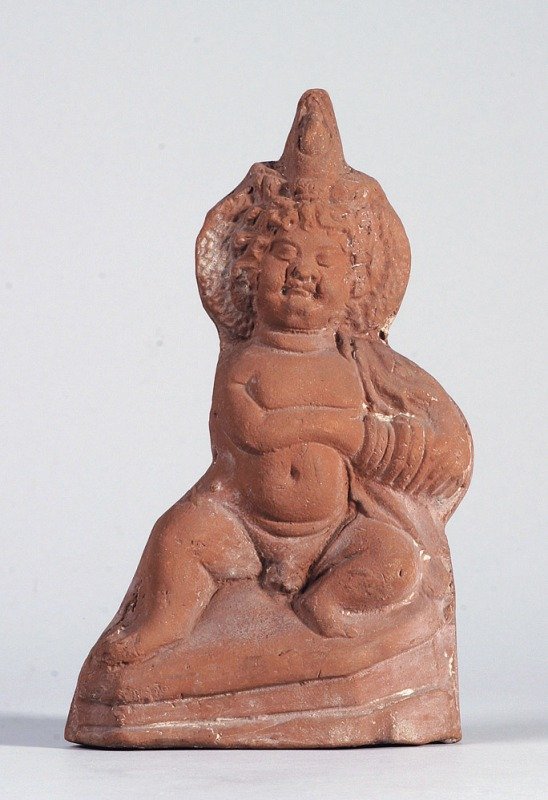 Figurine of Seated Harpocrates with Pot 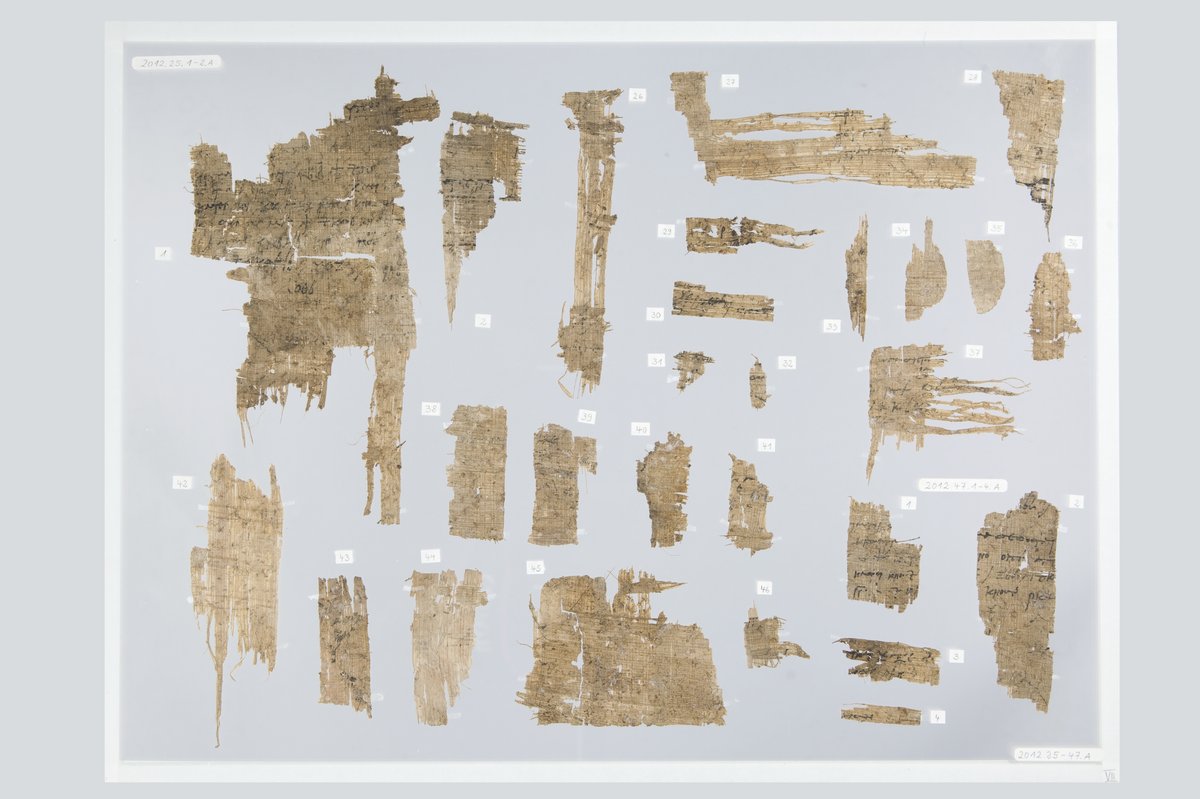 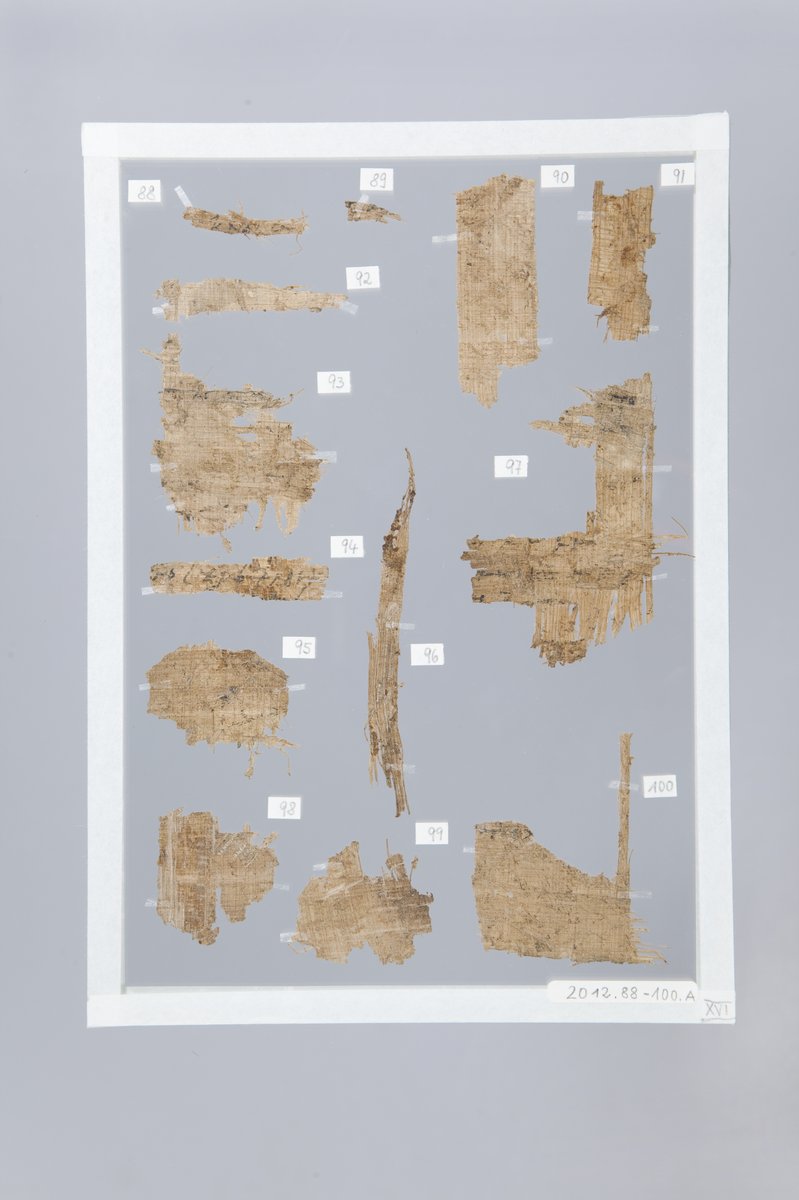